Kanye West appeared on Celebrity Family Feud with his wife, Kim Kardashian-West, along with some of his cousins. This makes some wonder if he has any brothers or sisters. Well, West has no siblings, which makes him an only child.

Having no siblings, Kanye has found family with the Kardashians and Jenners, who are an ever-expanding brood. And today, Kanye has three kids of his own – North, Saint and Chicago.

Kanye West’s parents are Donda West and Ray West. According to Donda’s obituary, she passed away in 2007, while Ray is still alive today. Though Kanye isn’t often seen with his dad, in March 2018, Daily Mail reported that he was out with Ray in Malibu, California. Over the years, Ray has worked many jobs, from being a photographer, to working as a counselor, and even working as a paprazzo.

According to Daily Mail, when describing his parents and their backgrounds, Kanye stated, “My father was a paparazzo himself. My father was a medical illustrator, a Black Panther, a Christian marriage counselor. My mother was the first black chair of the English department in Chicago State. They didn’t raise me to be out here wrestling with random paparazzi in front of LAX.” Kanye also told Complex that when he was growing up, his parents struggled to support the family.

Kanye West’s parents divorced when he was just 3 years old and he mainly lived with his mother, though he spent summers with his father. He and his mother actually lived in Nanjing, China for a while, where she was teaching. Daily Mail reported that West says he started rapping in the third grade and got a keyboard when he was 14 years old. He said that, “I found myself just wanting to work on that all the time. I found myself running home from school because I had an idea. Looking at the clock and it was only like 2:30, I was like ‘I wanna get this beat down!'”

West also said that it was his mother’s influence who helped him become a success. In a 2002 interview with MTV, he explained, “I just had the hunger. My mother never raised me to ask for a handout. You’ve gotta get in where you fit in, you might be somebody’s guy and you end up being better than that person, or you might be an intern. The question is, how do you get into this industry?”

When West appeared on Celebrity Family Feud, unfortunately for him, his team did not win, both teams were playing for charity. In fact, they were playing for money to donate to the same charity – the Children’s Hospital of Los Angeles. Because of this, Khloe Kardashian and Kendall Jenner, who were each going to play “Fast Money” for their winning team, decided to give that opportunity to West and his wife, Kim Kardashian-West, who’ve dreamed of playing the quick-paced segment of the show.

On Celebrity Family Feud, West never looked happier to be playing with his family and fans took notice. Perez Hilton wrote on Twitter that, “Kanye was having the time of his life on Family Feud! Don’t think I’ve ever seen him smile so much!!” Watching the show, West’s wife also tweeted, “Kanye has a permanent smile on his face during this whole Family Feud episode.” 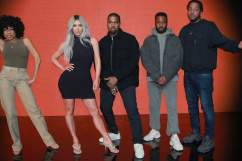