Lydia Hearst is a model, actress, and fashion blogger. Hearst, 33, is married to comedian, actor, and television host, Chris Hardwick. The couple does not have any children together.

On June 15, Lydia’ Hearst’s husband was accused of emotional and sexual abuse by his ex-girlfriend, Chloe Dykstra.

1. Her Husband Has Been Accused of Emotion & Sexual Abuse

On Friday, June 15, actress Chloe Dykstra published an article on Medium in which she opened up to being emotionally and sexually abused by an ex-boyfriend, believed to be Hardwick. The two dated from 2012 through 2014.

Although Dykstra didn’t mention Hardwick by name, she says that the abuse came from a man that she was dating who was almost 20 years older than her. Hardwick was born in 1971 while Dykstra was born in 1988. Additionally, Dykstra mentions that the man she’s referring to was sober — and Hardwick has been sober for more than 14 years.

Dykstra claims that her relationship with her ex “started off poorly.” She claims that she was working off a set of ground rules in her relationship, and they included not having any male friends, not drinking alcohol, and not taking any photos as a couple.

“I was terrified to piss him off- so I did what he said… including let him sexually assault me. Regularly. I was expected to be ready for him when he came home from work,” Dykstra wrote.

Neither Hardwick nor Hearst have responded to Dykstra’s claims. 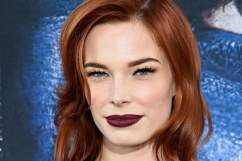 2. She Met Hardwick the Day After His Dad Died

Hardwick and Hearst met during production of a Talking Dead episode back in 2013. At the time, Hearst was a member of the audience and was introduced to Hardwick after the show.

The two ended up bonding over the loss of their respective dads — Hardwick was mourning the loss of his father, who died the day before of a heart attack, and Hearst’s dad was battling cancer and passed away a month after she and Hardwick first met.

However, their relationship didn’t take off right away. The two didn’t keep in touch, but Hardwick reached out several months later, encouraged by a mutual friend — hair stylist, Sean James.

“I think I still have the first voicemail Chris ever left me saved on my phone (that’s right he actually called me, he didn’t text!) and I will never forget our first few dates. They were very sweet, and a lot of fun with casual dinners at various restaurants, a trip to the Museum of Jurassic Technology and ice cream (I love sweets!),” Hearst told Harper’s Bazaar in a 2016 interview.

Hardwick “opened the door and the whole floor was covered in purple rose petals and there were bouquets of wild flowers and orchids all over the room,” Hearst told People. “It was dimly lit with candles and he proposed. He got on one knee and gave me a candy ring.”

Hardwick later presented his bride-to-be with her grandmother’s wedding ring.

“My biggest win of the night was actually @lydiahearst saying YES!!!! This ring belonged to her grandmother Catherine Hearst and @patriciahearst has graciously and wonderfully passed it down to me to give to Lydia. IT’S OFFICIAL!!! What an absolutely perfect and amazing night!! I love this woman with all my heart….#YesThisMeansWhatYouThinkItMeans,” Hardwick captioned an Instagram photo of the diamond ring he gave his now-wife.

The two tied the knot on August 20, 2016. The couple exchanged vows at the Langham Huntington Hotel in Pasadena, California in front of 650 guests. Hearst were a custom pink Christian Siriano gown, while Hardwick wore a custom Prada suit.

4. She’s Very Close to Her Mom, Patty, Who Was Kidnapped by the Symbionese Liberation Army

Hearst is very close to her mother, Patty Hearst, heir to the fortune of Hearst Publishing.

In 1974, Patty was kidnapped by the Symbionese Liberation Army and was arrested after being involved in a bank robbery for the left-wing terrorist group. She was sentenced to seven years in prison and ended up only serving 22 months, after being pardoned by President Bill Clinton in 2001.

“I am very proud of my mother – she is one of the greatest influences in my life. She has instilled in me this belief that I have a responsibility to make a difference, to live up to my family name and become involved with contemporary issues that are important,” Lydia Hearst told the Daily Mail in 2008.

After her release from prison, Patty Hearst married her bodyguard, Bernard Shaw. They were married until his death in 2013.

5. She’s an Ambassador for Operation Smile

Hearst has spent a good portion of her adult life giving back to those less fortunate. She has been an ambassador for Operation Smile for several years. Operation Smile is an organization that aims to help children with cleft lip or cleft palate.

In 2012, she was presented with the organization’s Smile Award for her work and dedication to their cause.

“Working with Operation Smile is a completely life altering experience and an organization I am truly passionate about and grateful to be a part of. It is incredible and truly inspiring to be a part of something with so many unique individuals who come together for the greater good of helping others and saving lives one smile at a time,” Hearst told Design Scene.