Nicole Nafziger and Azan Tefou’s relationship on 90 Day Fiance has been under scrutiny by Nafziger’s family, as well as by viewers across America. Nafziger had been reportedly sending money to Tefou for years, as he struggled to find work, and when Nafziger was shown visiting Tefou, their relationship hit some bumps. Nafziger seemed to push Tefou into a father role with her young daughter quickly and she yearned for affection that Tefou did not provide.

Tefou had been applying for his K-1 visa. Unfortunately for the couple, he was denied being able to move to the United States as Nafziger’s fiance. Though she didn’t find out the reason behind the denial, Nafziger decided that going to Morocco to marry Tefou in his home country was the only way to go. But, just before Nafziger left to go to Morocco, she finds out there are recordings of Tefou talking to another girl about kissing her. On one of the recordings, according to In Touch Weekly, Tefou said, “Good morning. I’m so sleepy. But I want a kiss right now. The kiss was good. What did you dream about last night? I think you want it.”

Tefou’s excuse for the recordings was that he was joking around drunk with friends and Nafziger appeared to accept this, though she was visibly upset. Her stepfather, Joe Fouraker, weighed in on the cheating allegations to Radar Online, saying that, “He had an explanation and said, ‘That was before I met you.’ She believed him. She wants to believe the best in people. She isn’t mature enough to understand people will take advantage of her. She’s a foolish young lady.”

I love these two so much? I love how much they love each other♥️#familyisnumberone #familyfirst

According to Reality Blurb, Tefou has multiple girlfriends in addition to Nafziger. There are also claims that Tefou has a girlfriend in Morocco, who he plans to marry once he’s living in the United States. He reportedly has planned to divorce Nafziger after three years in order to make this happen.

So, what is going on with Nafziger and Tefou today? Did the two get married? Are they still together? According to In Touch Weekly Nafziger is reportedly still together with Tefou and she has actually gone through a major weight loss. She also has addressed some of her haters online, saying, “My life. My choices. My mistakes. My lessons. Not your business.”

As far as any wedding goes, Nafziger and Tefou have NOT gotten married and Nafziger has returned home to Florida. Nafziger’s stepdad, told Radar that, “They called it off. They said the timing wasn’t right … Is she going back to get married? I don’t know. She still talks to him. I think she still intends to go back. The wedding dress is still there.”

Nafziger actually returned to Florida on May 21, 2018, because her Visa had run out, according to her stepfather, who explained to Radar, “She had to come back here. She was there for almost six months. She is now living with her sister in a mobile home. Her daughter May is with her.” 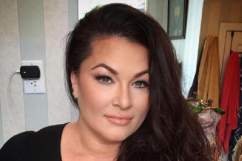