Getty Richard Harrison is dead at 77.

Richard Harrison, also known as “The Old Man” on the popular reality television show Pawn Stars, has died. According to his son, Pawn Stars’ Rick Harrison, The Old Man died after a long battle with Parkinson’s Disease.

Parkinson’s is a disorder of the central nervous system. It is most commonly diagnosed in people over the age of 40. The disease often presents itself as a tremor in one hand. Patients may also experience slower-than-normal movement, stiffness, and loss of balance.

The news of The Old Man’s passing was announced by Rick Harrison on Instagram. He shared that his father died on Monday, June 25, surrounded by his loved ones. The senior Harrison was 77 years old.

“Richard Benjamin ‘The Old Man’ Harrison passed away this morning surrounded by those he loved. He will be tremendously missed by our family, the team at Gold & Silver Pawn and his many fans the world over. He was my hero and I was fortunate to get a very cool ‘Old Man’ as my dad. That I got to share him with so many others and they got to see what a great family man he was is something I am grateful to have experienced with him. He lived a very full life and through the History television show ‘Pawn Stars’ touched the lives of people all over, teaching them the value of loving your family, hard work and humor. We appreciate everyone’s thoughts and prayers and ask that we are provided some privacy at this time,” read Rick Harrison’s post.

A rep for the History Channel released the following statement on behalf of the network.

“We are deeply saddened by the loss of our friend Richard ‘The Old Man’ Harrison, a beloved member of the HISTORY and ‘Pawn Stars’ family.  He will be greatly missed for his wisdom and candor.”

According to the Gazette Review, The Old Man suffered a stroke a few years ago. It is believed that his health was the reason that he “retired” from the pawn shop, which he opened in 1989.

In 2016, Old Man fell victim to an internet death hoax. Despite “RIP Old Man” starting to trend on social media at the time, Richard Harrison had not died. It is believed that his health and his decision to retire led some people to believe that he had passed away.

The Old Man was a favorite on Pawn Stars. He has been described as a “family man” who was “generous to a fault” when it came to his grandchildren.

“Always asking ‘What’s new?’ when he sees you, even if that is every day, he wants to know what is happening at the store from financials to funny stories. He may come off curmudgeonly but is a sweetheart like no other. He is wonderful in his wisdom and awesomely adorable,” reads his bio on the Pawn Stars website. 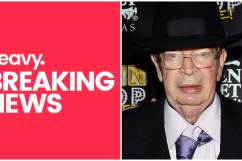