Rio Chapo is the Georgia rapper who retroactively edited a Facebook post to make it appear as if he predicted the tragic shooting of XXXTentacion. A posting from the rapper that has been shared more than 20,000 times reads, “XXXTentacion gone get shot tomorrow.” The timestamp on that post says it was published on June 17 at 3:56 p.m, 24 hours before XXXTentacion was shot dead in Deerfield Beach, Florida. The editing history on Chapo’s Facebook post says that it was edited at around 6:00 p.m. on June 18, two hours after the news broke about the shooting. The original post from Chapo read, “Finna take me a stupid ass name. It’s boring asf.”

Here is the edited post that is going viral:

According to his Facebook page, Rio Chapo is an aspiring rapper from Macon, Georgia. In the intro section of his page, Chapo describes himself as a “Money Making Bastard.”

Chapo wasn’t the only rapper from Macon, Georgia, who posted about XXXTentacion. Rapper Yung Mac posted in the aftermath of XXXTentacions’s shooting saying, “200 likes and I’ll upload the video of XXXTentacion saying he is not dead.” Yung Mac then linked to one of his own recordings.

Since the tragic shooting of XXXTentacion, there has been no shortage of Twitter gossip about who is behind the shooting. Rappers Soldier Kidd and Soldier Jojo were forced to take to Instagram to deny their involvement. Another Twitter user who appeared to admit to being behind the shooting, later admitted his claims were false before deleting his account.

The Broward County Sheriff’s Department has said that they believe that robbery was the motive for the crime. The sheriff’s office has also said that a $3,000 reward is being offered to anyone who comes forward with information that leads to an arrest. 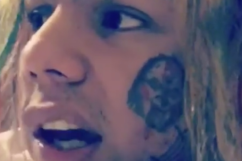