Soldier Kidd is back on social media in full force after a brief hiatus on Tuesday. He has been sharing his music, and seemingly trying to take advantage of the attention that he’s getting following the death of rapper XXXTentacion.

Police say that XXXTentacion was shot and killed while sitting in his car in southern Florida, on Monday, June 18. According to TMZ, the two suspects were described as “black males wearing hoodies” and the “shooter was wearing a red mask.” It didn’t take long for the internet to suspect that Soldier Kidd and his friend, Soldier Jojo, had something to do with the shooting, based on various photos and videos they had posted to their respective social media accounts.

Soldier Kidd released a video in which he said that he was innocent and that he had nothing to do with XXX’s death. He was off of social media for a while, before reinstating his Instagram account, but he made sure to keep the comments on his posts turned off. That hasn’t stopped social media users from taking to Twitter to discuss his posts, however.

On Wednesday morning, he posted a photo to his account. In the caption, he wrote, “Rainbow. No 6ix9ine ?.” It’s unclear what Soldier Kidd may have meant by his caption, but he was in Rainbow City at the time, and rapper 6ix9ine is known for his rainbow-colored hair.

Interestingly, there has been a lot of talk about rapper 6ix9ine and his ongoing feud with Chief Keef in recent weeks. In fact, many people have been worried for 6ix9ine’s safety, including ex-NBA star Matt Barnes.

Additionally, reports that XXXTentacion messaged 6ix9ine and told him to be safe have also been circulated since XXX’s passing.

Despite Kidd’s post about 6ix9ine, he does seem to be making an effort to further clear his name when it comes to the death of XXXTentacion. For example, on his Instagram story earlier today, he uploaded a post that read, “shooters had all black, red bandanas. Stop wasting time. Find the real killer.”

After social media users thought that he was using the Twitter handle @SniperGangRed, Soldier Kidd also posted the following message on Twitter. The @SniperGangRed account’s owner posted that he “killed” XXXTentacion, but later said he didn’t and deleted his account. Many social media users thought that the account belonged to Soldier Kidd, so he took a minute to clear up those rumors.

Never had another twitter this the one and only soldier Kidd ?

It does appear as though Soldier Kidd has been telling the truth. On Wednesday, June 20, police arrested 22-year-old Dedrick D. Williams, and booked him for first degree murder. It is unknown if police are seeking any other suspects in the case. 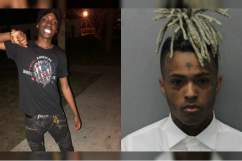