Shortly after a shooting in Southern Florida that claimed the life of 20-year-old rapper XXXTentacion, the internet believes it has found the suspects. Social media has been filled with rumors that rappers Soldier Kidd and Soldier Jojo were behind XXX’s death, but both have denied any involvement.

The latest chatter involves tweets that social media users say were sent out by Soldier Kidd on a now-deleted account. But there is no evidence the account belonged to Soldier Kidd, as he has a Twitter account under the handle @soldier_kidd, and that account is still active. And @SniperGangRed, the user who posted the tweet claiming to have killed XXXTentacion, posted a series of tweets denying he was Soldier Kidd and saying he wasn’t being serious.

You can see a screenshot of the tweets below.

@SniperGangRed also posted a picture of a Louis Vuitton bag not long after police said that one was stolen from XXX’s vehicle before he was shot. You can see a screenshot below.

Looking back at @SniperGangRed’s Twitter account using “Way Back Machine,” you can see that he tweeted that he was just messing with people.

“I gotta delete some of these tweets,” he wrote, adding a couple of “cry-laugh” emojis. “Y’all dumb *ss sh*t that ain’t X bag stfu,” he added.

Not long after XXXTentacion was pronounced dead, the Broward County Sheriff’s Office released a description of the suspects.

“At least one of the suspects fired a gun striking [XXXTentacion]. Both of the suspects fled in a dark-colored SUV. Investigators say it appears to be a possible robbery,” reads the description, in part. According to TMZ, police say that the suspects were “black males wearing hoodies” and that the “shooter was wearing a red mask.”

Soldier Kidd posted a video on his Instagram account in which he says that he had nothing to do with XXXTentacion’s death and that he didn’t even know the rapper. You can watch that video below. Please be advised that the video may contain strong or offensive language.

Several people have posted comments on the above video, accusing Soldier Kidd of shooting XXXTentacion.

“The only money [you] said [you’re] gettin’ money is because [you] robbed X after [you] shot him,” added another.

“You look hella scared, seems like you got something to hide,” wrote a third. 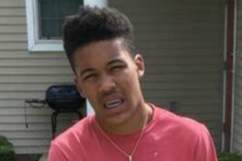