After months of anticipation and rumors, Drake is releasing his fifth studio album Scorpion. The album is set for release on Friday, June 29th, and will include the hit singles “God’s Plan” and “Nice for What”, as well as the promotional track “I’m Upset.”

How to stream and listen to Drake’s new album

Like Drake’s previous releases, Nothing Was the Same and Views, the album will be made available on a number of different streaming platforms at 12:00 a.m. EST on Friday, or 9:00 p.m. PST on Thursday, depending on your time zone.

We’ve listed the different platforms that the album will be released on, and the ways in which you can listen to them below.

You will be able to stream Drake’s album on iTunes and Apple Music after the livestream. If you have an Apple Music account, you can go into the app on your phone or tablet and set the notifications to alert you when the album is out. Click here to learn how.

According to the standard release schedule, Drake’s album will also be available to stream on Spotify. If you don’t have a Spotify account, you can sign up for one here and pay only $0.99 for the first three months.

The Scorpion album will also be available to listen to on Tidal. The streaming service offers a free 30-day trial with Tidal Premium, which provides  access to music videos and curated playlists.

Scorpion will be Drake’s first studio album since 2016’s Views. The singles for the album have been some of the rapper’s most successful to date, with “God’s Plan” spending a whopping 11 weeks atop the Billboard Hot 100. “Nice for What”, which features a prominent Lauryn Hill sample, topped the Billboard Hot 100 for an additional five weeks.

The third single “I’m Upset” has failed to chart as high, peaking at number fifteen on the Hot 100, but the music video, which sees Drake reunite with the cast of the hit show Degrassi, has been well-received by fans. You can check it out below.

The official tracklist was revealed on Thursday morning, confirming that Scorpion will be Drake’s first double album. Side A, which has twelve tracks and no listed features, will consist mainly of hip-hop, while Side B will consist of thirteen R&B tracks.

The production credits have yet to be released, which suggests that they may be guest features on the album that are simply not yet listed. For a rundown of who Drake has been collaborating with recently, check out the article below. 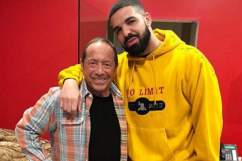