It’s only episode 2 for season 14 of The Bachelorette, but the curve balls have already started to be thrown. Becca Kufrin gets her first solo date of the season, but she also gets some unexpected news from a front-runner. The show airs at 8 p.m. ET/PT and 7 p.m. CT, so for those who do not have cable or cannot get to a TV, we have some options. Fans can watch The Bachelorette 2018 online, live on your computer, phone or streaming device by signing up for one of the following cable-free, live-TV streaming services:

Hulu With Live TV: In addition to their extensive Netflix-like streaming library, Hulu now also offers a bundle of live TV channels, including ABC (live in select markets). You can sign up for “Hulu with Live TV” right here, and you can then watch a live stream of ABC (the network which broadcasts the show) on your computer via the Hulu website, or on your phone, tablet or streaming device via the Hulu app.

DirecTV Now: The ABC network (live in select markets) is included in all four channel packages. You can sign up for a free 7-day trial no matter what package you choose, and you can then watch ABC live on your computer via the DirecTV Now website, or on your phone, tablet or streaming device via the DirecTV Now app.

Sling TV: ABC (live in select markets) is included in the “Sling Orange” plus “Broadcast Extra” channel package. You can sign up for a free 7-day trial, and you can then watch ABC live on your computer via the Sling TV website, or on your phone, tablet or streaming device via the Sling TV app.

The official ABC synopsis of tonight’s episode reads, “Twenty-one men – still reeling from the dramatic first rose ceremony – look to get their love story with Becca off to a good start as they move into the mansion. Fan-favorite Bachelorette couple Rachel and Bryan put eight of the bachelors through their paces in an obstacle course meant to test their abilities as a groom. Blake gets the first one-on-one date of the season planned by Chris Harrison with an assist from celebrity rapper Lil Jon. Ten lucky men arrive at a gym where they are challenged to show off their athletic skills while playing in a dodgeball tournament in front of a live audience. Iconic comedian Fred Willard joins Chris for the colorful commentary. Some shocking news will be shared during the after-party which rocks Becca’s world, and she must remain focused on her ultimate goal of finding a soul mate.” 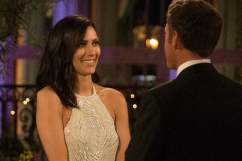 Bachelorette star Becca Kufrin was first revealed as the new star of The Bachelorette in March 2018, on the After the Final Rose Special for the finale of The Bachelor. There, she had to watch the break up as a viewer and then confront Luyendyk on stage live. Kufrin, towards the end of the show, was then announced as The Bachelorette and she had the opportunity to meet several of her suitors. Now, she takes on a group of men vying for her love, attention and, for some, their 15 minutes of fame.

This season looks to be a dramatic one (no surprise there) and recently, Kufrin dished to E! News that, “I mean, you’ll get everything this season. You’ll get the drama, you get the tears, you get the happiness, you get the laughter.” Fortunately for Kufrin, according to what she revealed on Good Morning America, she is happily engaged, so there is light at the end of the man tunnel. Kufrin revealed, “It’s a crazy thing, living with multiple men, trying to date one person, and so it’s hard. I wanted somebody to still enjoy the entire thing and really get to know me and somebody who’s not judgmental because I don’t like when people tear somebody else down. I just wanted somebody open and kind and fun.”