For those who do not want to know who Becca Kufrin is engaged to, STOP READING NOW. With that out of the way let’s get into the spoilers on the 2018 Bachelorette winner, along with the final 4. According to USA Today, Kufrin has revealed that she is engaged, gushing that, “It just has a different feeling. It feels so good to say it, and this time I feel like it’s gonna stick … I feel like I just can’t wipe the smile off my face. It just feels like it’s just a perfect fit for me … in my heart, it just feels so right. I feel like I finally found my missing puzzle piece.”

So, who is she engaged to? According to Reality Steve, Becca Kufrin is engaged to Garrett Yrigoyen.

Recently, Yrigoyen caught a lot of heat for an Instagram scandal and he issued a public apology. According to E! News, he had previously “liked” some offensive and controversial posts online and came under fire. Us Weekly then reported that he issued a public apology, stating that, “To those who I have hurt and offended: This is all new to me. I went on The Bachelorette for the adventure and possibility of falling in love, not fame. I did not know what to expect once the show aired. I am sorry to those who I offended and I also take full responsibly for my ‘likes’ on Instagram that were hurtful and offensive. garrett_yrigs12 was my former Instagram handle and I decided to take it down and start fresh because I have learned an extremely valuable lesson and am taking steps to grow, become more educated, and be a better version of myself.”

And when it comes to Kufrin’s response about the Instagram scandal, News Week reported that when word of the scandal broke, Kufrin was in the middle of traveling. She was able to chat with E! News and said that, “Everyone is entitled to their own opinions, and at the end of the day I wanted to go on this journey to open up myself and have people see my love story unfold and I would hope that they would stay open and respect me but also stay open and respect these 28 guys that went along on the journey with me.” So, it sounds like Kufrin is standing by her man. News Week reported that the controversial posts Yrigoyen liked were, “images that mocked liberal feminists, Parkland high school shooting survivor David Hogg, undocumented immigrants and the trans community.”

As for the other three men in the final 4 for season 14, they include Colton Underwood, Jason Tartick, and Blake Horstmann, according to Reality Steve. Some may be surprised to hear that Underwood gets a hometown date, considering his past of dating Tia Booth, Kufrin’s friend from The Bachelor 2018. For his hometown date, Tartick is originally from Buffalo, New York, so he takes Kufrin to the Anchor Bar, which is the home of the ORIGINAL buffalo wings. Horstmann takes Kufrin to his hometown in Colorado, as does Underwood, as both are from the state. 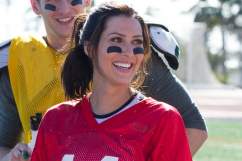