Hallmark is premiering a new movie tonight that promises to be absolutely delightful: Love at First Dance (originally called “Wedding Dance.”) It stars Becca Tobin and Niall Matter. Read on to learn more about where the movie was filmed, along with other stories about the filming.

Love at First Dance was filmed in locations in Canada, including the Empress Hotel and the Royal Theatre in Victoria, BC, but some scenes were also filmed in New York. Read on for more details and locations.

In an interview with Media Village, Matter explains that they filmed in both Victoria, British Columbia in Canada and in New York. This is unusual for Hallmark, since most of their movies are filmed wholly in Canada, with a few special exceptions.

Matter was excited about the New York scenes. “No green screen, it was real!,” he told Media Village. “As an actor, you want to do something in New York, so to be in the city made it feel authentic.  It’s often a missing ingredient in films and I feel Hallmark and the producers really felt that and made sure they encapsulated it in this film.”

Here’s a photo from the Royal Theatre:

Another location used in the filming was La Roux Patisserie on Fisgard Street in Victoria, according to What’s Filming.

By the way, this isn’t the Empress Hotel’s first appearance in a Hallmark movie. It was featured in the movie A Rose for Christmas and at other times.

Of course, although some scenes were filmed in New York, there were some “New York” scenes also filmed in Victoria, VicNews.com reported. An NYPD cruiser was seen in Oak Bay in late April/early May while they were filming. They turned Oak Bay’s Thorne & Thistle flower shop into a location for the movie. The flower shop will be a prominent part of the film, VicNews reported, as it will be where a happy couple buys flowers before they get married.

According to VicNews and Victoria Buzz, the wedding takes place at the Victoria Golf Club.

The number of police forces in #yyj is getting out of hand. @vicpdcanada @SaanichPolice @NYPDnews pic.twitter.com/jE3LSdTbHQ

Matter said that the storyline for the movie is unique too, just like the filming locations. His character starts out engaged and has some tough decisions to make along the way. He tells Media Village: “[We] didn’t want people to dislike the characters and have people [not] want our characters to end up together. It’s a tough tight rope to walk but I think we pulled it off.”

Matter once was injured in an oil rig accident and almost lost his right leg, Media Village shared. He needed extensive physical therapy, but he’s all better now, as you can see when he dances in the movie. He said dancing was really tough, because you spend hours on one scene and are basically dancing all day long. “I was shocked at how sore and stiff I was,” he said.

Tobin, meanwhile, is a trained dancer. She told Country Living that she just had to tap into her prior dance experience to get ready for the role. “She comes from the New York theater scene, and that’s where I came from, so I know that world in and out.” 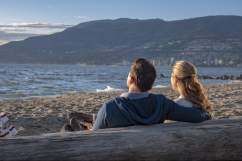 Where Was Hallmark’s ‘The Perfect Bride 2: Wedding Bells’ Filmed?