Getty Thomas Mueller of Germany plays with the ball during the Germany training session ahead of the 2018 FIFA World Cup at CSKA Sports Base Vatatinki on June 14, 2018 in Moscow, Russia.

The 2018 opening ceremony of the World Cup airs today, as reported by CBS Sports. Read on for all the details on what time it airs, who is performing at the event, what channel to watch and more information below.

2018 WORLD CUP OPENING CEREMONY TIME SCHEDULE: The opening ceremony of the 2018 World Cup date is June 14, 2018. It is set to air at 9 a.m. CT and 10 a.m. ET. The opening game is between Russia and Saudi Arabia and it follows the ceremony, beginning at 11 a.m. ET, according to FIFA. This year’s opening ceremony will reportedly air a half hour before kick-off.

HOW TO WATCH THE WORLD CUP OPENING CEREMONY ONLINE: The live stream information for the World Cup games is the same as for the opening ceremony. If you don’t have cable or cannot get to a TV, you can still watch Fox live on your computer, phone or streaming device by signing up for one of the following cable-free, live-TV streaming services:

Hulu With Live TV: In addition to a Netflix-like on-demand streaming library, Hulu also offers a bundle of live TV channels, including Fox (live in most markets). You can sign up for “Hulu with Live TV” right here, and you can then watch a live stream of the show on your computer via the Hulu website, or on your phone, tablet or streaming device via the Hulu app.

FuboTV: Fox (live in most markets) is included in the “Fubo Premier” channel package. You can sign up for a free 7-day trial, and you can then watch the show live on your computer via the FuboTV website, or on your phone, tablet or streaming device via the FuboTV app.

If you cannot watch the event live, FuboTV comes with 30 hours of Cloud DVR (with the ability to upgrade to 500 hours), as well as a “72-Hour Lookback” feature, which allows you to watch most events or shows up to three days after they air even if you forgot to record them.

Sling TV: Fox is included in the “Sling Blue” channel package. You can sign up for a free 7-day trial, and you can then watch the show live on your computer via the Sling TV website, or on your phone, tablet or streaming device via the Sling TV app.

If you can’t watch the program live, you can get 50 hours of cloud DVR storage as an additional add-on.

WORLD CUP 2018 PERFORMERS: Diplo and Will Smith are reported to be performing. Smith is performing the World Cup’s anthem song “Live It Up”, alongside Kosovan singer Era Istrefi and Nicky Jam. Robbie Williams is the headlining performer. In addition, Telegraph has reported that 500 dancers, gymnasts and trampolinists will be involved, as will Russian soprano Aida Garifullina. Singers Placido Domingo and Juan Diego Florez are participating, as are pianist Denis Matsuev and opera stars Anna Netrebko, Yusif Eivazov, Ildar Abdrazakov, and Albina Shagimuratova. 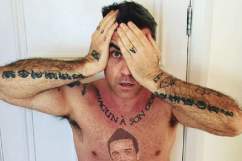 2018 World Cup Performers: Who Is Performing at the Opening Ceremony?

Read More
TV, World Cup 2018
Get the rundown on the schedule of the 2018 World Cup Opening Ceremony. What time does it air and what channel is it on TV?