Tonight begins the first round of the judges’ cuts on America’s Got Talent 2018, with comedian Ken Jeong diving in as the first celebrity guest judge of season 13. Jeong joins Heidi Klum, Mel B, Simon Cowell and Howie Mandel on the judges’ panel to see 20 of the winning acts in the second round of auditions. But, only one of the 20 will get a golden buzzer reward from Jeong, sending them through to the live shows. So, who are the contestants that are performing tonight?

If you remember Aaron Crow, he was the magician who nearly killed judge Howie Mandel, blindly slicing through a pineapple atop Mandel’s head, with a sword. During the judges’ cuts, Crow shoots an apple off of judge Heidi Klum’s head, with the help of guest judge Jeong. See the death-defying video of tonight’s act below.

Another act to watch tonight, who most likely will not make it through to the live shows, is Celina and Filiberto. The two share a great love for each other, but their dirty dance moves are too much for some viewers. These two senior citizens win in life, even if they aren’t winners on AGT.

Over the years, judge Simon Cowell said that if the show could find a dog that sings, that’s all he would ever want to see. Well, when Pam brings on dog Oscar, Cowell’s prayers have been answered. As Pam plays the piano, Oscar howls along on-key. Another animal-related act is the young Lilly Wilker, who does animal impressions. For her first audition on the show, she did impressions of a dolphin, horses, roosters, and other farm animals. But, the cutest part of Wilker’s act is her sweet and genuine giggle, in between the noises she makes.

When singer Daniel Emmet appeared for the first round of auditions, he had a good voice, but judge Simon Cowell gave him a major challenge. Emmet had about an hour to learn a song assigned to him by Cowell and the song was in another language. Opera singer Emmet shocked and pleased Cowell, along with the rest of the viewers, not only with his voice, but his ability to come through and adapt so well under pressure.

Clearly, there is a huge variety in the acts, when it comes to the performers. Howie Mandel talked about the wide range of contestants to Deadline, saying, “America’s Got Talent is the last bastion—and the only bastion—of real variety television. Television was created as another way of projecting vaudeville. All those vaudeville shows, that’s where everybody went before there was TV; in between movies, people went to theaters to see the juggler, and the magician, and the singer. Then, there became shows in America like Ed Sullivan, where everybody would gather around on Sunday night. That’s what made Elvis, Elvis. That’s what made The Beatles, The Beatles. And that is what’s happening with America’s Got Talent.” 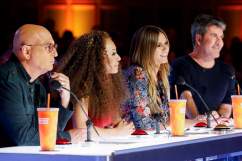