As The Bachelorette 2018 season enters the overnight dates, fans are already looking ahead to the Men Tell-All episode and even the finale. But, before we get into spoilers on who wins The Bachelorette 2018, details on the Men Tell-All Special, and additional info, THIS IS YOUR SPOILER WARNING. So, if you do not want any spoilers, STOP READING NOW.

Next week airs the Men Tell-All episode and Becca Kufrin comes face-to-face with the men she’s eliminated throughout the season. There are a few men who will not be attending, however. The final 2 this season are Garrett Yrigoyen and Blake Horstmann, according to Reality Steve, so they will not be a part of the special. They were not present for the taping over the weekend. Another former contestants, who Reality Steve reported was not there is Lincoln Adim.

Over the course of the season, several reports came out about Adim and one involved a court case. People reported that Adim was convicted of battery and assault, after groping a woman on a cruise in 2016. Press Secretary Jake Wark of the Suffolk County District Attorney’s Office stated that, “The judge ordered him to stay away from the victim and attend three Alcoholics Anonymous meetings per week during those two years. If he complies with the judge’s orders, he will not have to serve out his term, but if he fails to comply with those orders or re-offends, he could be ordered to serve out the year behind bars. By law, he is expected to register as a sex offender.” 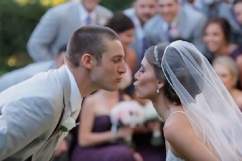 With this conviction coming to light, ABC most likely would not want him to continue to be a part of the franchise. After the incident became known, Warner Bros., who produces The Bachelorette, stated to TMZ, “No one on The Bachelorette production had any knowledge about the incident or charges when Lincoln Adim was cast, and he himself denied ever having engaged in or been charged with any sexual misconduct.”

Someone who was in attendance, however, according to Reality Steve, was Jason Tartick, who made it to the final 3 on the show. Reality Steve tweeted that, “Just an update from the Men Tell All taping. Speculation leading into it that maybe Garrett and Lincoln would be there. They weren’t. Not surprising … In case there were those who didn’t believe the spoilers, Jason is eliminated on Monday’s episode. He was at the taping. That’s why Becca is crying in the previews. She lets him go before the overnight date.”

Now let’s fast forward to the finale episode. It’s down to Blake Horstmann and Garrett Yrigoyen, but which one of them is the winner? Who is Becca Kufrin engaged to? Reality Steve first reported that the finale winner is actually Garrett Yrigoyen.

The Bachelorette Men Tell-All episode airs on July 30, 2018. The following week will then feature the finale, as well as the After the Final Rose live event. Then, on Tuesday, August 7, 2018, Bachelor in Paradise will premiere its 5th season and fans will see some familiar faces from Becca Kufrin’s season of The Bachelorette. A few of the familiar faces who dated Kufrin include Jordan Kimball, Colton Underwood and Wills Reid.