Getty Actor Bruce Willis and actress Demi Moore. On October 25, 2000, it was reported that the couple, who separated in 1998 filed for a divorce at a courthouse near Sun Valley, Idaho last week.

From 1987 to 2000, Bruce Willis was married to fellow A-lister Demi Moore and the two went on to have a friendly relationship, even after their marriage ended. Together, they had three daughters – Rumer, Tallulah and Scott – and all three kids were raised in the state of Idaho, away from the Hollywood spotlight. Moore and Willis moved to Idaho in 1988 in order to live like “normal people”, as reported by the Independent. After the couple divorced, their daughters moved back to Los Angeles, California, according to People.

According to the Independent, though Moore and Willis divorced in 2000, they officially split in 1998. Once Moore and the girls moved back to Hollywood, an insider revealed to People that, “The whole parent-child dynamic really started to change into what it’s become. Rumer began to go out in Hollywood, while Scout started to follow in her sister’s footsteps with going out. It’s hard to listen when a parent tells you, ‘Don’t smoke cigarettes, don’t go out and have fun,’ when they go drink and smoke cigarettes at a party.” Today, all three of Moore’s daughters are sober.

Moore also took a break from acting, and the reasoning was apparently to focus on her family. In an interview with InSTYLE, she reportedly said that, “I just needed to stop and take a break … One of my goals is to build a loving relationship so that my children, as adults, will want to share their lives with me. The foundation I lay — if it’s not there now, it won’t be later.”

So, how did Willis and Moore first meet? According to Zimbio, the ex-couple met at the screening of the movie Stakeout in August 1987. Earlier that year, Willis was engaged to actor Emilio Estevez, according to Huffington Post.

Willis was not Moore’s first husband. In fact, she married a man named Freddy Moore in 1980, when she was the young age of 18 years old. Moore’s third husband was Ashton Kutcher, who became friends with Willis as well. Moore and Kutcher married in September 2005 and the ceremony actually included her ex-husband, Willis, in addition to their children.

GettyActors Ashton Kutcher, Demi Moore and Bruce Willis pose with their children Rumer and Tallulah at the premiere of “Live Free Or Die Hard” presented by Twentieth Century Fox at Radio City Music Hall on June 22, 2007 in New York City.

Today, Willis is married to a former model named Emma Heming and together, they also have two daughters. Heming has taken on the role of step-mother to Willis’ three children with Moore and Willis has said that the entire family, including Moore, has become like “a tribe”.

At Bruce Willis’ Comedy Central Roast, friends and family showed up to attend, as well as poke fun at Willis. But, there was also a surprise guest and that was Moore. Moore even took the opportunity to joke about why she and Willis got divorced. According to Variety, Moore said, “People wonder why our marriage came to an end, and in all honesty I think it was because some jealousy started to creep in. I think Bruce never really got over the fact that I rocked the bald look better than he did.” She continued, “After our divorce, he said he considered the end of our marriage his biggest failure, but Bruce, don’t be so hard on yourself, you’ve had much bigger failures. I mean Planet Hollywood, Hudson Hawk, Striking Distance, campaigning for Michael Dukakis, turning down Clooney’s role in Ocean’s Eleven to focus on playing the harmonica?” 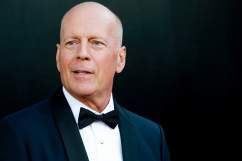