Cheryl Tweedy, who is also known as Cheryl Cole but just goes by Cheryl in her professional career, and her boyfriend, Liam Payne, have split.

Cheryl, 35, rose to fame as part of the all-girl singing group, Girls Aloud. While with the group, Cheryl launched her solo career. She is well-known in the U.K., and works as a television host and model.

She is a mom of one son, Bear, who recently turned 1.

1. She & Payne Announced Their Split on Social Media & Are Dedicated to Raising Their Son, Bear, Together

Cheryl and Liam Payne — who is 10 years her junior — started dating in 2015, after meeting on the UK version of X Factor when Cheryl was a judge. In early 2016, the couple’s relationship was red hot — and X Factor judge Simon Cowell told The Sun that the two were very happy together.

“I saw them together and we had a really nice dinner. They were on good form. They’re like two little chipmunks madly in love. Literally, they were so cute. But importantly they both seemed very happy over here and very relaxed. I’m happy for them,” Cowell, who is responsible for putting together Payne’s former band, One Direction, told the outlet.

In February 2017, Cheryl confirmed that she was pregnant with Payne’s child by posing with her baby bump in a photo for The Prince’s Trust and L’Oreal Paris. She gave birth to their son, Bear, in March 2017.

Cheryl and Liam Payne announced their split on their respective social media accounts on Sunday, July 1.

“We are sad to announce that we are going our separate ways. It’s been a tough decision for us to make. We still have so much love for each other as a family. Bear is our world and we ask that you respect his privacy as we navigate our way through this together,” the message read.

The couple has refrained from sharing photos of their son on social media. The most recent was posted by Payne and only shows Bear’s little hand. You can see it below.

Can’t believe my little man is one today, where does the time go? Happy birthday son you’re my world??

2. She Has Been Married Twice Previously

Cheryl previously dated soccer star Ashley Cole. The two started seeing one another in 2014 and announced their engagement the following year after he proposed in Dubai. The two tied the knot in London on July 15, 2006, according to BBC News.

Cheryl and her then-husband inked a deal with OK! Magazine, giving the magazine exclusive rights to their wedding photos, earning them a reported $1.3 million.

In 2010, the two decided to split. Cheryl filed for divorce on May 26, 2010, citing “unreasonable behavior.” The divorce was granted four months later. She kept the last name Cole for several years, but decided to only use her first name for her career.

According to popular celebrity relationship database, Who’s Dated Who, Cheryl went on to date Derek Hough, Taio Cruz, and Tre Holloway. Those relationships were all relatively short-lived, however.

In 2014, Cheryl found love again, marrying Jean-Bernard Fernandez-Versini. She met the French restauranteur just three months before their nuptials, but kept her wedding a secret, according to BBC News.

“I usually do not discuss my personal life but to stop the speculation I want to share my happy news. Jean-Bernard and I married on 7/7/14. We are very happy and excited to move forward with our lives together,” she wrote on her personal website after tying the knot for a second time.

She and Fernandez-Versini split a couple of years later, and never had any children together. Their divorce was finalized in October 2016, several months after she had already started dating Payne.

3. She Was Charged With Aggravated Assault in 2003

Cheryl has had a very successful career, but she’s also had some challenges in her life. In 2003, for example, she was charged with aggravated assault after she got into an altercation with a woman named Sophie Amogbokpa at a nightclub. At the time, Cheryl was 19 years old.

“It was reported that Tweedy screamed racial abuse at London law student Sophie Amogbokpa, 39, before punching her in the face, leaving her with a badly swollen eye,” according to a BBC News report.

“I was shocked. I don’t care how many number ones she’s had, if she was nobody, she shouldn’t have said those things to me or hit me. I had done nothing to her and whoever gives me an eye like this should be punished,” Amogbokpa told the Sunday Mirror at the time.

A spokesperson for Cheryl’s record label at the time, Polydor Records, released the following statement on her behalf.

“Cheryl obviously deeply regrets getting into the fight but when the terminology that she was supposed to have used came out yesterday she was shocked and absolutely distraught. The press have been completely negative and have even been digging out ex-boyfriends of hers who happen to have been black. … We will be meeting with our lawyers because these allegations of racial abuse are completely false.”

In October 2003, Cheryl was found guilty of assault. She was sentenced to 120 hours of community service and was forced to pay $650 to Amogbokpa. She also was forced to pay more than $3,300 for prosecution costs, according to BBC.

While Cheryl is more well-known in the UK than in the U.S., she has become a style icon in her own right.

“Her wardrobe choices have become as successful as her singles – while filming for The X Factor, she had fashion fans watching her every sartorial move and was snapped wearing a string of fashion-forward outfits from Givenchy and Preen, to McQueen and Missoni,” British Vogue said of her style back in 2010.

She was named FHM’s Sexiest Woman in the World in 2009 and in 2010. She has also won several awards, including a Glamour Women of the Year Award for TV Personality and Best Dressed in 2009.

5. She Has an Estimated Net Worth of $30 Million

The Richest estimates that Cheryl has a net worth of $30 million. She has earned the majority of her money as a singer, but has also done some television hosting and modeling over the years.

Cheryl started off as a dancer and a model before joining the pop group, Girls Aloud. The group was formed on the show Popstars: The Rivals in 2002. The group had several hit singles before calling it quits in 2013.

When she was young, Cheryl “won several modeling competitions and appeared in commercials,” according to The Richest. The site goes on to report that “she has become one of UK’s highest-profile celebrity, thanks in part to her role as a judge on British singing competition, X Factor, whose weekly audience swelled to 14 million viewers after she joined the cast.”

She also earned money from her time on The X Factor, as well as from Coca-Cola, as she inked a deal to promote the Coke Zero products, netting her upwards of $600,000. In 2011 and 2012, she won millions of dollars in a settlement, after she filed a lawsuit against the American version of The X Factor.

Her most recent solo album is Only Human, which was released in November 2014. Some of her hit singles include “3 Words,” “Parachute,”  “Crazy Stupid Love,” “I Don’t Care” and “Only Human.”

“There are big downsides that come with having money. As many as with not having money. I mean, they’re different types of stresses, but they’re both stresses,” Cheryl told The Telegraph back in 2015. 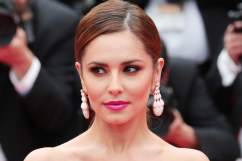