Christina El Moussa is one of the most famous HGTV stars these days. Not only did she go through an extremely public divorce with her reality star husband, Tarek El Moussa, but her dating life since the split has also been thrust into the spotlight.

El Moussa rose to prominence on the show Flip or Flop, which she still co-stars on alongside her now ex-husband. But her presence on our television screens may have us all wondering: how much money does Christina El Moussa make? What is her net worth?

1. She Has an Estimated Net Worth of $6 Million

Bringing the 90s back @pinkdustcosmetics ?

El Moussa has an estimated net worth of $6 million, according to Celebrity Net Worth.

Fip or Flop, a large source of El Moussa’s income, premiered in 2013 and has aired over 86 episodes over eight seasons, with millions of viewers around the world.

Along with her appearances on Flip or Flop, El Moussa has been a guest judge on Brother vs. Brother, a reality show starring Drew Scott and Jonathon Scott. With Tarek, she created the El Moussa Group; however, the company was rebranded after the two divorced.

The reality star was born in Anaheim, California, and grew up in Anaheim Hills. She attended university in southern California and began her work in real estate after college. It was through real estate that she met Tarek.

2. She Recently Purchased a $4.1 Million Home

Walk on the wild side with me @ant_anstead ? #HMF ?

According to Realtor.com, El Moussa recently purchased a $4.1 million home in Newport Beach. The home spans 4,870 square feet and has four bedrooms and four bathrooms.

Interestingly, the home is far more expensive than what the couple purchased together in 2013; that property was worth $2 million.

Speaking to Realtor.com, Drew Henry, the founder of Design Dudes, admits he was shocked at the price tag of Christina’s new home. “The purchase price of this home was shocking to me: When compared to the El Moussas’ family home and even Tarek’s new place, it’s almost double the price.”

3. She and Tarek Experienced Financial Struggles After the Housing Crisis

According to Country Living, Tarek and Christina experienced financial struggles after the 2008 housing crash and had to scale back on their expenses.

Celebrity Net Worth writes that in 2008, “The couple went from living in a home that cost $6000 per month to an apartment that cost $700 per month.”

Luckily, the pair scored their HGTV show just a few years later. Country Living reports that the two make about $10,000 per episode, and get to keep profits from the houses they flip.

4. She Plans on Opening Drug and Alcohol Rehab Centers

Lunch with this cutie at our fav spot @javierscantina ♥️ #braydenjames

In an interview, she said, “Two years ago, I was focused on trying not to sink. But after I started exercising, eating right, surrounding myself with the correct people, I felt this switch.”

In making the center, she will reportedly be helped by longtime friend Cassie Zebisch and pastor Tim Storey. Fox news quotes El Moussa as saying, “Everyone’s been there. Everyone’s had a setback, but it’s how you move forward and what you do with your future, that’s what matters.”

I’m so excited to announce my new series on HGTV called Christina on the Coast, which will debut in early 2019! I will be helping homeowners redesign their outdated properties into beautiful spaces! #ChristinaOnTheCoast #HGTV

El Moussa’s new HGTV show, Christina on the Coast, is set to premiere in 2019.

In a statement to E Online, El Moussa said, “Design is my favorite part of the house-flipping process and I can’t wait to be able to now work directly with clients and create a space they’ve always dreamed of having.”

The show’s premiere season will consist of eight episodes, and chronicle Christina’s experience as she expands her design business in southern California.

Christina’s statement continued, “The past few years have brought a lot of change into my life and I am so excited to see what the next stage has in store for me both professionally and personally, there is so much to look forward to and this is only the beginning.” 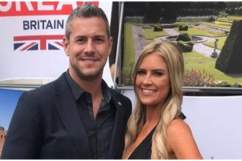