Rick and Morty creator Dan Harmon deleted his Twitter account Monday morning after an extremely disturbing 2009 video of him pretending to be a child molester resurfaced online.

The two-part video series titled Daryl was created as a parody of the Showtime series Dexter. The sketch aired in June 2009 on Channel 101, a site for short films created by Harmon and his writing partner Rob Schrab.

Harmon proceeds to enter through the window of a home and lays down on a couch next to a plastic baby doll. He then pulls down his pants and mimics sexual assault. Harmon uses crude and offensive language throughout, including the remark: “I rape babies.”

You can watch the full video here (NSFW).

Harmon’s horrifying sketch comes just days after Guardians of the Galaxy director James Gunn came under fire for his own jokes about child rape and pedophilia. Gunn was fired by Disney for the posts.

Harmon apologized for the sketch in a statement:

“In 2009, I made a ‘pilot’ which strove to parody the series ‘Dexter’ and only succeeded in offending. I quickly realized the content was way too distasteful and took the video down immediately. Nobody should ever have to see what you saw and for that, I sincerely apologize,” Harmon said.

An Adult Swim spokesperson also commented on the video in a statement to IGN:

At Adult Swim, we seek out and encourage creative freedom and look to push the envelope in many ways, particularly around comedy. The offensive content of Dan’s 2009 video that recently surfaced demonstrates poor judgement and does not reflect the type of content we seek out. Dan recognized his mistake at the time and has apologized. He understands there is no place for this type of content here at Adult Swim.

Harmon previously worked at NBC, where he created and produced the popular sitcom Community.

Reaction to the Sketch has Been Mixed on Social Media

While no one would argue that the sketch isn’t offensive and vile, some on social media are pointing out that Harmon shouldn’t be punished for content he made nearly a decade ago. People have also been quick to point out the parallels to the James Gunn situation.

The Dan harmon thing is waayyyy less of a big deal than the Gunn thing, which wasn't a big deal in the first place.

Can we stop punishing people for things they said a decade ago? There's a line of course, but a joke, regardless of how funny it is, is still a joke and although we don't think about it, the world was very different 10 years ago. First James Gunn, now Dan Harmon, this is crazy

So people are trying to make Dan Harmon the next person to go down…you guys do realize that #RickandMorty also started out with a Channel 101 short where Doc asks Mharti to lick his balls, yes? Adult Swim knew this when the show was ordered. Nothing should happen

Others are condemning Harmon’s choice of “humor” while also pointing out a supposed ulterior motive by those who are bringing situations involving Gunn and Harmon to light.

The James Gunn & Dan Harmon situations are pretty disturbing. There's a clear difference b/t a edgy/tasteless jokes & genuine beliefs, bc context matters. It's also clear that the alt-right nutjobs making a stink are bad faith hypocrites. Disappointed so many are taking the bait.

Again for the cheap seats: I disapprove of James Gunn and Dan Harmon’s jokes from back in the day. They were horrendous, and the artists rightly moved on from that period of their work. They are *still accountable for their comedy*.

So now the Mike Cernovich people are going after Dan Harmon. You people are pathetic. I have faith that Adult Swim won’t be as reactionary as Disney. But there needs to be some growth in the corporate side not falling for the traps.

In 2017, Megan Ganz, a writer who worked with Harmon on Community, called him out for sexually harassing her on set.

Harmon admitted to being “part of the problem” on his podcast “Harmontown.” He said that he constantly flirted with Ganz even though it was clear she didn’t want him to. He described his behavior as “creepy” and that his actions worsened when she didn’t flirt back.

Ganz accepted his apology, calling it a “masterclass in How to Apologize.” 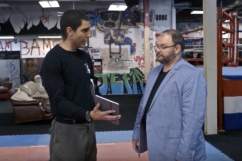 Read More
Breaking News, Rick and Morty
Rick and Morty creator Dan Harmon made a horrifying short film in 2009 that made light of pedophilia. The sketch sees Harmon play a pedophile named Daryl.