Demi Lovato has been hospitalized after an apparent overdose, according to TMZ. Sources affiliated with law enforcement told TMZ that Lovato “was treated with Narcan — an emergency treatment for narcotic overdoses — at her home.”

The “Sorry, Not Sorry” singer’s current condition is unclear, but her rep recently told TMZ that she is “awake” and “with her family.”

“Demi is awake and with her family who want to express thanks to everyone for the love, prayers and support. Some of the information being reported is incorrect and they respectfully ask for privacy.”

Lovato does not have a boyfriend, nor is she dating anyone. She split from her on-again/off-again boyfriend, Wilmer Valderrama, in 2016. Although a source told People Magazine that the two could have worked it out, they decided that they were better off being friends.

“She’s very vocal about the fact that he is the love of her life. A lot of their issues had to do with their age difference, but she’s matured a lot even in the past year or so. At first it was really fun for her to be single and date around, but now she’s starting to see that the grass isn’t always greener,” a source told the outlet back in February.

Since her split from Valderrama, Lovato, 25, has stepped out with a couple of people.

She dated MMA fighter Guilherme “Bomba” Vasconcelos last year, according to Who’s Dated Who. The two went out on a couple of casual dates, but didn’t get too serious. Lovato then started dating another MMA fighter, Luke Rockhold. But after a couple of months she ended up getting back together with “Bomba.” Lovato and Bomba dated for about four months before breaking things off in May 2017.

“It wasn’t a dramatic split. Bomba is a good guy, but the relationship just ran its course,” a source told People Magazine at the time.

Earlier this year, Lovato sat down for a chat with InStyle Magazine and talked about her relationship status. She said that she was “not suffering” and that she’s learned a lot about herself in terms of her needs and wants in a relationship.

“I’m not suffering because I’m alone. There were many years I was in a relationship and I wasn’t learning about myself. Now I’m learning about what I like, what I need, and what I want,” she told the mag. She went on to talk about her feelings on relationships and love. “I think love is love. You can find it in any gender. I like the freedom of being able to flirt with whoever I want,” she explained. 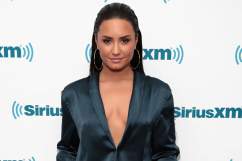 Does Demi Lovato Have a Boyfriend?