A short while after TMZ reported that Demi Lovato had suffered an overdose and was hospitalized, a death hoax surfaced on social media. Several people have been tweeting that TMZ reported that Lovato has died, but the outlet has not given an update on Lovato’s condition.

“Law enforcement sources tell us Demi was treated with Narcan — an emergency treatment for narcotic overdoses — at her home. We’ve confirmed the OD occurred at her house in the Hollywood Hills,” TMZ reported. “Paramedics found Demi unconscious when they arrived at her home,” reads one of the outlet’s latest updates, posted at 4:48 p.m. Eastern.

A short while ago, Lovato’s rep told the outlet, “Demi is awake and with her family who want to express thanks to everyone for the love, prayers and support. Some of the information being reported is incorrect and they respectfully ask for privacy.”

According to the TMZ report, Lovato was out with friends on Monday night, celebrating a birthday. She appeared “happy” in the photos.

At this time, all reports indicate that Lovato is alive, after receiving treatment at her home in the Hollywood Hills and then being rushed to a nearby hospital. There have been several unconfirmed rumors floating around that Lovato is “brain dead,” but no media outlets have confirmed or denied these rumors.

You can read some of the misleading and untrue tweets below:

TMZ is reporting that she is dead

Lovato has struggled with addiction for much of her adult life. After being sober for six years, however, she recently revealed that she had started using again. She shared this difficult news in her single, “Sober.” You can read some of the lyrics below.

You can listen to “Sober” below.

Before releasing this song, a photo of Lovato holding what appeared to be a beer surfaced online and fans were quick to assume that Lovato had started drinking again.

“I don’t have to defend anything but it was Red Bull,” she tweeted at the time. You can see that photo below.

When Lovato was given the “Spirit of Sobriety” award at the Brent Shapiro Foundation for Drug Prevention Summer Spectacular in September 2017, she gave a very moving speech.

“Every day is a battle. You just have to take it one day at a time, some days are easier than others and some days you forget about drinking and using, but for me, I work on my physical health, which is important, but my mental health as well,” she said. 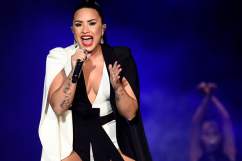 Demi Lovato Boyfriend: Is the Singer Dating Anyone?

Read More
Demi Lovato
A Demi Lovato death hoax has surfaced on Twitter after news broke that she overdosed.