Hailey Baldwin has spent the past few months traveling the globe with pop singer and former boyfriend Justin Bieber, sparking rumors that the two were a couple once more. These rumors were more than confirmed on Saturday, July 7th, when TMZ announced that Baldwin and Bieber were engaged.

The couple have had a tumultuous past together, breaking up and reuniting at various points since 2015, when they were first publicly linked. “We didn’t speak for quite some time and there was a lot of weirdness that went on,” Baldwin told The UK Times, “[but] we’ve moved past that.”

His smile lights up my entire world??

In addition to her relationship with Bieber, Baldwin has been romantically linked to several different celebrities over the years, including pop singer Shawn Mendes, NBA player Jordan Clarkson, and actor Cameron Dallas.

When asked whether it was easier to date a celebrity that someone who wasn’t famous, Baldwin leaned towards the former. “It’s definitely easier,” she told Maxim. “You’re never worried, ‘Are they only hanging out with me because they want to get attention or be seen?’ It can be weird for somebody who’s never been in this world before to be sucked into it.”

Here’s what you need to know about Baldwin’s ex-boyfriends and dating history:

Baldwin was first linked to Shawn Mendes when two attended a 2017 Halloween party thrown by Kendall Jenner. “He had his arm around Hailey and stayed by her side all night,” a source tells People Magazine. The two were reportedly spotted together at concerts and even went on a vacation to Europe together, according to Seventeen, but both of them maintained that they were simply friends.

When asked about whether she was dating Mendes, Baldwin told Access Hollywood: “He’s a friend of mine and we hang out, so I see why people obviously want to make assumptions. Any guy I hang out with people are like, ‘Oh, she must be dating him or something’s going on,’ but I don’t ever really feel like I have to explain myself.”

The alleged couple attended the 2018 Met Gala together, but Mendes continued to play things close to the chest. “We’re really good friends,” he told W Magazine. “It’s funny, she’s such a pro with this type of stuff. I want it to be amazing for her, so I’ve been trying for the past 24 hours to be really silly so that she stays on.”

Baldwin and Mendes remain friendly, but there has been a notable downturn in their friendship since she has reunited with Bieber.

2. She Dated Cameron Dallas from April to June 2017

E! Online reports that Baldwin and Cameron Dallas knew each other before 2017, but their relationship turned romantic in April of that year. They hung out together at the Met Gala, and began dating covertly around the same time. “[They] met through friends and had an instant connection,” a source told E! Online. “They are both signed with IMG [modeling] agency and run in the same friend group.”

According to the E! source, the relationship between Baldwin and Dallas was never meant to be a serious one, which is partly why it was kept hidden from the public for so long. “Hailey wants to keep it low-key between them,” the source explained. “It’s not serious, but they are definitely into each other.”

Despite the covert nature of their romance, things appeared to fall apart a few months after they started. In a July interview with Elle Magazine, Baldwin spoke about the complicated nature of their relationship. “He’s not my boyfriend yet. Technically, I’m single. It makes me so nervous, oh my God,” she said. I don’t want my mom to be like, ‘So…’ My parents know everything. I’ve cried to them and been like, ‘I don’t understand why he blah blah blah…’ And then my mom always says, ‘You need to show a lot of grace and be patient and forgiving.’”

By August, their relationship appeared to be over. Baldwin unfollowed Dallas on Instagram, and was spotted attending a Zoe Church Conference with Bieber the same weekend. Nether she nor Dallas has commented on the relationship since.

Dallas, 23, is a male model and social media personality who rose to prominence through Vine and YouTube. He later went on to star in the teen comedies Expelled (2014) and The Outfield (2015), and currently stars on the Netflix series Chasing Cameron (2016-).

Though never officially confirmed, Baldwin and Los Angeles Laker Jordan Clarkson were romantically linked for much of 2017. The alleged couple were first spotted holding hands on New Year’s Eve 2016, according to HollywoodLife, despite the fact that Clarkson was said to be dating Baldwin’s friend Kendall Jenner.

Baldwin and Clarkson were reportedly seen getting dinner together in January, and again in March, according to Daily Mail, where they were said to be holding hands. Neither Baldwin nor Clarkson addressed the dating rumors directly, but the NBA star did allude to the fact that his excellent play was the result of his then-current romance.

“I [credit] my pops, my family, that’s always No. 1,” Clarkson told Yahoo Sports. “But second probably the girls and stuff. Females. Know what I mean? I love women. They don’t like you when you’re down.” Baldwin and Clarkson were last spotted together at the end of 2017.

While far from a real relationship, and largely the result of rumors, Baldwin has been romantically linked to popular musicians like Drake and Luke Hemmings. The Mirror reports that Baldwin attended a 2016 Memorial Day party where cozied up to Drake and allegedly “hooked up” with the Canadian rapper.

In May, Us Magazine added that the pair went out on a dinner date in May 2017, and that Drake was actively “pursuing” a relationship with Baldwin.“Drake has been pursuing Hailey,” an insider told Us Weekly. “He has been showering her with gifts. He’s really trying hard. She’s interested but she’s not serious about [him]. She’s still hung up on Justin.”

Baldwin’s alleged relationship with Luke Hemmings, the guitarist for the band 5 Seconds of Summer, dates back to 2015. They were believed to be an item, but Baldwin shut down any and all rumors about them when she posted a tweet that read: “I never went on a date with Luke from 5 seconds of summer. So if everyone wants to chill that’d be dope.” The tweet has since been deleted.

A source for the Daily Mail added: “They are just good friends! Hailey has done a few events and projects with them… There’s nothing romantic is going on at this time. They had a great friendly dinner!”

Easily the most complicated and long-lasting romance that Baldwin has been involved in has been with Justin Bieber. In 2014, the pair were photographed at the Hillsong Church in New York City, but both parties denied there was anything romantic going on. “I’ve known him since I was so young — since I was like 13 — and we’ve just been good friends over the years,” she told E! News. “We have just stayed close and there’s nothing more to it than that.”

Baldwin and Bieber made their relationship official in 2016, when the singer posted a photo of them kissing on his Instagram. In an interview with GQ, Bieber spoke about Baldwin, and how he wants to be careful and not rush anything with her. “What if Hailey ends up being the girl I’m gonna marry, right? If I rush into anything, if I damage her, then it’s always gonna be damaged,” he said. “It’s really hard to fix wounds like that. It’s so hard…. I just don’t want to hurt her.”

The couple split in 2017, but were seemingly back together by June, where they were seen getting close in Miami and New York City. Neither Baldwin nor Bieber have yet to comment on their engagement. 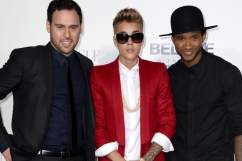 Who Will Be Justin Bieber’s Best Man?