Madison McKinley is the wife of professional tennis player John Isner, who recently had the highlight of his career with a victory over 13th seeded Milos Raonic in the Wimbledon quarter-finals. At 6 ft. 10 in., Isner (who is known for playing the longest tennis match in Wimbledon history in 2010) married McKinley in 2017, and the couple are now expecting their first child in the coming year.

On the day that Isner proposed to McKinley, she posted to Instagram, “This man had me from the first time we shared a glass of water at the pub six years ago. Our hearts are so full and I can’t wait to see what the rest of our lives bring us!! He is stuck with me!! @johnrisner#isaidyes #finally”

Now, with a baby girl on the way, a burgeoning jewelry line and a husband playing at Wimbledon, McKinley no doubt has her hands full. Here’s what you need to know.

1. She Owns a Jewelry Company

McKinley owns a Dallas-based jewelry company called “Madison McKinley” which she launched with her mother, Karla McKinley in 2017. The goal of the jewelry line is to create “handmade, artisan pieces that are timeless, functional and unique.”

According to the brand page, the jewelry is meant to capture “the spirit of wanderlust”, and was inspired by Madison’s constant mixing and matching of vintage and modern pieces, between her own jewelry and that of her grandmother’s.

The jewelry ranges vastly in price, with some pieces selling for less than $100, and other pieces driving all the way through to the multi-thousand-dollar range.

2. She & Isner Are Expecting Their First Child, a Baby Girl

SURPRISE!! Isner party of 3 coming at you!! We are so blessed and excited to share this news with you! #babygirl??

McKinley and Isner announced their pregnancy via an Instagram post on April 22. The baby will be a girl, though it’s not clear when specifically McKinley is due.

After his second round at Wimbledon, Isner was asked what type of tennis game he wanted his future daughter to have. He replied, “Two-handed and hopefully a better backhand than mine.”

McKinley is already conditioning her future daughter to crush the tennis courts, as her Instagram posts reveal her in a tennis outfit “with this growing baby girl”.

3. She’s Known Isner Since 2011, and They’ve Been Married for One Year

We made it a week – and yes he is still my husband!

According to Player WAGs, McKinley and Isner began dating in 2011 after meeting at a fundraiser event for the Justin Gimelstob Children’s foundation in 2011.

Player WAGs claims that McKinley originally found Isner to be “weird and a bit goofy”, but that Isner got her number from a friend and they were soon texting one another every day.

McKinley and Isner were married in December, 2017 in South Carolina. Of their wedding day, Isner said in an Instagram post, “Couldn’t have scripted it any better.”

Though it’s unclear how often she does it, it dominates her feed. However, she has yet to post a photo of her 6’11 husband on a horse. She’s also repeatedly tagged or hashtagged Steerhead Ranch, her family’s ranch in Wyoming.

McKinley has named a collection in her jewelry line after Steerhead Ranch, and all of the pieces in the collection are handmade at the workshop right on the ranch.

Of Steerhead Ranch, McKinley wrote in a blog post,  My grandparents bought this ranch in the 80’s and I have been going every summer since before I can remember…The Steerhead Ranch is located in the beautifully quaint town of Buffalo, Wyoming, populations 5,000. The town with only 3 cowboy bars, and more cows than people is filled with many artisans that are masters of there craft. The ranch boarders the Big Horn Mountain range, and the Big Horn National Forest. It is home to some of the most amazing wildlife where they are free to roam.”

5. Her Husband, Isner, Sort of Broke the News About Having a Child Early in a Pretty Funny Way

.@JohnIsner is going to be a father—the news breaks just a few short weeks after this exchange at the #MiamiOpen…? pic.twitter.com/jnWgjbfhso

In a press conference at the Miami Open, Isner sort of broke the news about his wife’s pregnancy when a reporter accidentally said that Isner had a child. After making a face when the reporter said that, Isner tried to cover it up by saying, “Yeah, hopefully in the future, of course. Yeah.”

The reporter asked in a follow-up question whether this newfound stability had improved his mental game while on the tennis court.

“It does help,” Isner replied. “It settles things down. You do realize that there are lot more important things than tennis.” 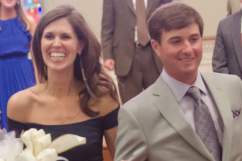 Read More
5 Fast Facts, Sports
Madison McKinley is a Dallas-based jewelry designer who is married to tennis pro John Isner. They are currently pregnant with their first child.