Meghan Markle made quite the fashion statement in Ireland. The Duchess of Sussex stepped out wearing a Givenchy pantsuit as she explored the country with her husband, meeting a few cricket players at Croke Park during a Gaelic Athletic Association event in Dublin.

According to PopSugar, this is the first time that Markle has stepped out in pants since tying the knot. Although there isn’t a rule prohibiting female members of the royal family from wearing pants, it’s far less common.

“Over the past few weeks, the duchess has stunned in a gorgeous Dior dress, given us a lesson on how to choose the perfect LBD, turned heads in a pink suit dress, and surprised all of us in a simple shirt dress when she made her debut at Royal Ascot,” reports PopSugar.

Markle wore her suit top unbuttoned, showing off a relaxed, white tee-shirt underneath. The duchess completed the look with a pair of black leather pumps and a Givenchy belt. She carried a black leather clutch, holding the accessory under her arm to free her hands for clapping. According to Fashionista, the clutch is also Givenchy and it retails for more than $2400.

Not unlike her sister-in-law, Kate Middleton, the Duchess of Cambridge, Markle’s fashion choices always make headlines. Also, similarly to Duchess Kate, Markle seems to have chosen a preferred designer. While Middleton has taken a liking to Alexander McQueen’s designs (she’s also a very big fan of Jenny Packham), Markle has been seen wearing Givenchy more than once.

Upon touching down in Ireland, Markle was also in Givenchy. According to Vogue, the Duchess opted for an emerald green top and skirt combo. The site pointed out that Markle’s choice was “fitting” because “Ireland is, of course, known as the Emerald Isle.”

This trip to Ireland is the first official royal tour for the newlyweds, who celebrated their wedding on May 19. Prince Harry and Meghan Markle met with greeters, many of whom lined the streets in an effort to get a glimpse of the royal couple. The two toured Trinity College, visited the Famine Memorial, and spent some time getting to know President Michael Higgins — and his two mountain dogs.

The Duke and Duchess of Sussex will be heading back to London on Wednesday evening. 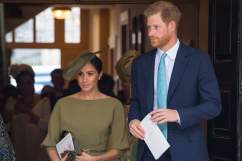