Mia Bally, whose real name is Ameea Janice Bally, is a cast member on season 7 of Married at First Sight and she has been matched with a former basketball player named Tristan Thompson. And no, it’s not Khloe Kardashian’s boyfriend. This is a different Tristan Thompson.

In any event, Bally describes herself as a woman of God, who attends a weekly bible study, and doesn’t kiss on the first date. Thompson also is a man of faith and the two were very excited when they met on their wedding day. Married at First Sight puts couples together in arranged marriages. Fortunately, Thompson and Bally were attracted to one another. On the other hand, the two deal with some major obstacles this season. But, before we get into the details, BEWARE OF SPOILERS. If you do not want to know anything about Bally and Thompson’s marriage, Bally’s legal issues, or the state of their relationship together, STOP READING NOW.

So, this season, preview videos have shown Thompson upset, saying his wife was detained at the airport. He also is shown telling the cameras that she lied to him. In another preview, Bally tells a friend that Thompson kicked her out of the house. So, why was Bally detained? Why was the couple having issues?

According to Monsters and Critics, Bally was detained because of a felony warrant that was issued for her arrest. The warrant was based on several stalking claims from an ex-boyfriend and the unauthorized use of an access card. The ex-boyfriend has been identified as a man named Jared Evans, according to police reports.

The detainment occurred on March 27, 2018 and Bally was taken in as a fugitive by officers from the Texas Department of Public Safety, according to Mugshots.com. The charges took place in Louisiana.

The arrest warrant came after Bally’s ex-boyfriend filed a complaint, claiming to be repeatedly stalked and harassed over the course of several months after the two reportedly called it quits in late 2016. Complaints were filed twice in 2017 and also twice in 2018, shortly before Bally tied the knot with Thompson, who apparently knew nothing about the incidents.

Shaunee Flowers from Monsters and Critics stated that, “The first report was from June 27, 2017, when he complained to police that Mia kept showing up at his home and his place of employment and wouldn’t leave him alone. While police were there taking the report, Mia showed up and was reportedly told by police to stop contact with her ex. Another report was filed on August 7, 2017, when police were called again. This time, Mia Bally’s ex complained that she was back to calling and texting and had reportedly shown up at his home again.”

The arrest warrant was issued on February 6, 2018.

Our guess is that Bally and Thompson have gotten divorced. Thompson clearly felt he couldn’t trust Bally after what happened. Today, Bally’s Instagram account has been set to private.

Reddit users have also commented on Bally’s arrest and charges. One user wrote, “According to the police report, Bally had ordered an iPhone and two protection plans on Amazon — leaving her ex with a bill of $1455.18, which he was able to recover. According to the police report, he was able to show proof of the charges and the Facebook messages to the officer responding to his call.”

Another user expressed that Thompson was getting the short end of the stick in this marital experiment, writing that, “This woman is bat shit crazy, they should give Tristan a do over, he seems like a genuine good guy, sticking him with her is just wrong.”

Bally’s case with the stalking charges is still reportedly open. 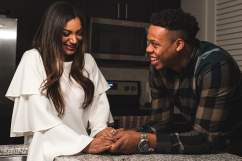 Read More
Reality TV, TV
Why was Mia Bally from Married at First Sight detained at the airport? Was it because she was arrested for stalking an ex-boyfriend named Jared Evans?