Nicole Nafziger and fiance Azan Tefou were shown dating, with the intent to get married on 90 Day Fiance, but it seemed like the wedding day would never come. Ultimately, Nafziger moved to Morocco so that the two could tie the knot, but when Nafziger failed to present the proper paperwork, they were unable to make it official. Once again, they had to postpone the wedding.

Recently, it seems that Nafziger has returned to the United States and is with her young daughter, May. According to In Touch Weekly, a Reddit user just say the mom and daughter together at a craft store. The Reddit user wrote, “Nicole sighting! My sister ran into Nicole and May at a craft store. No Azan and no ring! Yes May even had the leash backpack on.” Another commenter weighed in, saying, “I assume she came back to get the right papers and then went back to marry him. She just gave it away saying [she’s] loving her new family.”

Nafziger’s stepfather Joe Fouraker has confirmed that the two have not yet married and that Nafziger came back to the United States for a very specific reason. Fouraker told Radar Online, “They called it off. They said the timing wasn’t right … Is she going back to get married? I don’t know. She still talks to him. I think she still intends to go back. The wedding dress is still there.” Nafziger bought her wedding dress in Florida and then brought it to Morocco with her. After buying the dress, Nafziger talked up her purchase, along with the store, on her Instagram, writing, “I was so happy and lucky to find the perfect wedding dress for me and at an AMAZING price! Such great customer service and they give you honest advice! I love these ladies so much! If your looking for a wedding dress or bridesmaids dress in the Tampa/St Pete area, check them out for sure!! @beareroftheblingbridal #90DayFiance #TLC #wedding #weddingdress.”

Nafziger actually returned to Florida on May 21, 2018, because her Visa had run out, according to her stepfather, who explained to Radar, “She had to come back here. She was there for almost six months. She is now living with her sister in a mobile home. Her daughter May is with her.” 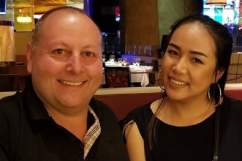 Annie Suwan and David Toborowsky Update: Are They Still Together?

Danielle Jbali, who didn’t have any luck with her ex-husband Mohamed on 90 Day Fiance, recently had some advice for Nafziger when it comes to her relationship with Tefou. According to In Touch Weekly, Jbali said, “I told her to research the religion and culture. That’s why I could not believe she was acting like that, because before I went to meet Mohamed, I researched everything. I asked him questions 24/7, and I even investigated where I was going by looking things up and giving Mohamed ideas of what I wanted to do or what I wanted to see and stuff like that, so I really invested myself into learning about his culture and the religion. I don’t think Nicole did that … I was not like that with Mohamed, trying to get him to kiss me out in public, because I knew through research and what he told me and explained to me.”

Another piece of advice that Jbali had was over Nafziger having her young daughter call Tefou “daddy”. Jbali said that, “I could not imagine doing that with a child like Nicole’s daughter cause she wouldn’t understand. See, my kids are old enough that they know who their dad is and they see their dad. So what is May gonna think if this doesn’t work out and Azan has to leave and he’s not in her life no more. How is Nicole going to explain that to her?”

Well, whatever the case, Nafziger and Tefou are still together and there have been no reports of a break up. 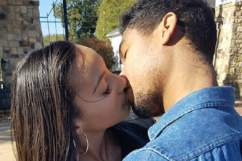 Chantel Everett and Pedro Jimenez: Are They Still Married?

Read More
90 Day Fiance, Reality TV, TV
What's the latest update on Nicole and Azan from 90 Day Fiance? Did they ever have their wedding? Are they married? Did they break up?