Season 6 of Orange Is the New Black is set to be released at 3 a.m. Eastern time and midnight Pacific time on Friday, July 27, 2017 (technically, the date is tonight). If that is too late for you to stay awake, you can watch it all at your convenience, just beware of spoilers. Here, you watch the new season once it begins on Netflix.

Generally, Netflix shows become available around 3 a.m. ET on the show’s set release date. For most seasons of OITNB, this was also true. But, sometimes Netflix likes to throw a curveball when it comes to leaking episodes of a show or making them available before the original series release time. Take House of Cards for example.

Netflix has released new seasons of House of Cards at different times and dates during its run. For the first couple seasons, it was released as scheduled, but when season 3 came out, Netflix decided to wait and release the episodes at 6 a.m. ET.

Orange Is the New Black‘s season 3 episodes ended up getting released six hours earlier, so you never know if this could happen again.

For a couple spoilers on some episode details that have leaked, read on below.

EPISODE 1: According to Orange Is the New Black Wikia the premiere episode description reads, “Picking up one week after the emergency response team stormed Litchfield Penitentiary, the ladies of Litch have been torn apart, literally and figuratively, as they enter a new facility.”

EPISODE 2: The title of episode 2 is reported to be “Shitstorm Coming”.

According to TV Line, season 6 will feel like “a whole new world,” especially with the cliffhanger at the end of last season. For those who need their memories refreshed, newly engaged Piper and Alex were waitin with their fellow inmates for the armed officers to come after the prison riot. In addition, “Litchfield’s inhabitants” were being put on buses that were supposedly being sent to other prisons. According to Newsweek, season 6 picks up right where season 5 left off, with the inmates awaiting transfer.

One thing that has some fans nervous is that Laura Prepon’s character, Alex, is missing from the extensive trailer, but Thrillist has reported she is set to appear in season 6. Other cast members and characters reportedly on board are Piper (Taylor Schilling), Taystee (Danielle Brooks), Red (Kate Mulgrew), Nicky (Natasha Lyonne), Frieda (Dale Soules), Suzanne (Uzo Aduba), Cindy (Adrienne C. Moore), Gloria (Selenis Leyva), and Blanca (Laura Gomez). But, according to USA Today, one person you may not see again on the show is Dascha Polanco, who plays Daya.

There are 13 episodes set to be released for season 6 and co-producer Tara Herrmann told The New Yorker that there were a lot of new writers in the mix for the new season. OITNB Adrienne C. Moore told The Hollywood Reporter that season 6 gives the show “an amazing facelift.”

As for future seasons of the show, iDigitalTimes reported that OITNB had been okay’ed for a couple more seasons after season 5’s release, so there should be at least one more season to go after this one. 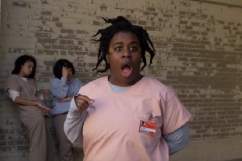 How to Watch ‘Orange Is the New Black’ Season 6 Online