Episode 6 of The Bachelorette 2018 airs tonight and the drama continues, especially when one bachelor is accused of veerbal abuse. But, before we get into all the details on what goes down on tonight’s show, as well as other big spoilers on future episodes, this is your MAJOR SPOILER WARNING. Do NOT continue reading if you do not want to know the secret revealed tonight, who gets eliminated, and more.

The official ABC synopsis for episode 6 reads, “Richmond, Virginia, whose past is inextricably connected to America’s rich history, is the backdrop for a defining week in Becca’s journey. Jason and Becca’s date takes the couple on a trolley tour around town, but the day ends on a stunning emotional note. Seven men pay homage to Virginia, one of the cradles of democracy, as they take a history quiz and then participate in the “Beccalection 2018” debate. Leo and Becca take a spectacular aerial tour of the state and try their skill at shucking oysters. Australian country superstar Morgan Evans caps off the night with a special performance. One bachelor mounts a shocking late-night surprise which may decide his fate with Becca. Which men will be on the right side of history?”

The show airs on Monday nights, from 8 – 10 p.m. ET/PT and 7 p.m. CT. Tune in to the ABC network or find instructions on how to watch The Bachelorette online here. Read on below for this week’s spoilers.

The contestants who get the solo dates tonight are Leo Dottavio (with the long hair) and Jason Tartick. On Tartick’s date, according to ABC, he and star Becca Kufrin take a trolley ride and head to a donut shop. They also visit the Edgar Allan Poe Museum before hitting up a brewery, where Tartick is surprised by a couple of his friends showing up to meet them. Reality Steve has reported the identities of Tartick’s friends to be David Arduin and Hawk Jameson. Rounding out the evening, Tartick and Kufrin share an intimate dinner, with Tartick bringing up some painful memories. According to Reality Steve, Tartick gets the date rose.

When Kufrin goes into her date with Leo Dottavio, she is emotionally drained from the group date, which was reportedly filled with drama. The two take a tour, shuck oysters and then take in a private dinner at Richmond’s City Hall. After dinner, country star Morgan Evans puts on a special concert.

Things do not go well for Chris Randone on tonight’s episode, for several reasons. According to Entertainment Tonight, he gets confronted by Kufrin, who asks him, “Did Connor ever room with you and want to switch rooms, because he was afraid you might lose it?” Randone becomes a little defensive and says the allegation makes him uncomfortable. Kufrin then replies with, “That’s why I want to get to the bottom of it. When I hear things that the guys are maybe more scared around you, or they feel threatened or that you’re verbally abusive, I’m going to ask you about it.”

But, Connor Obrochta isn’t the only contestant who gets into an uncomfortable situation with Randone tonight. Lincoln Adim seemed to be put up against Randone as well. Reality Steve reported that on the group date, “It all started with the fact that during the guys’ opening statements, a lot of them referred to the fact that one guy there tried to leave during the group date after party in Vegas, and that guy was Chris. Chris tried to leave because he felt he wasn’t getting any 1-on-1 time with Becca.” The confrontation then seemed to focus on Randone vs. Adim. Reality Steve stated that, “Chris said he would want a 2-on-1 against Lincoln because it would be an easy road for him … Chris also mentioned that Lincoln and Jason were talking shit behind Becca’s back and that’s when Lincoln seemed to get defensive and attacked Chris.”

According to Reality Steve, Chris Randone gets eliminated during the after party of the group date, which makes sense, since he was surrounded by controversy, both on and after the group date. His two rivals, Lincoln Adim and Connor Obrochta, are also reportedly the next two contestants to be sent packing. 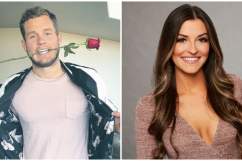