For weeks, there have been rumors that Southern Charm‘s Thomas Ravenel and his girlfriend Ashley Jacobs have been headed for a split. And, on the season 5 finale of the show, the rumor mill keeps churning. One rumor heard on the show is that Ravenel’s parents offered to pay Jacobs to move away. Another rumor was that Jacobs was either pregnant or an escort. But, the biggest rumor that keeps popping up is that Ravenel wants to break up with Jacobs.

As reported by People, on an episode of the show this season, Ravenel admitted, “When I first met Ashley, I wanted a companion, I wanted a best friend. It’s different now. I feel like my whole life, women have been attracted to me for the wrong reasons. I sought out fortune and fame and I thought maybe that would attract the right kind of woman, but I got it all backward … I see you as a wonderful person who has a wonderful career. That career helped make you the person that made me want to bring you all the way to the east coast. But the way things are going, I’m just some kind of sugar daddy.”

In the past couple of weeks, neither Jacobs, nor Ravenel have posted photos together on social media, but there’s still a good chance that the two are still together, since there have been no reports of a break up.

Ashley Jacobs moved across the country, from California, after working as a nurse, to be with Ravenel, in what seemed to be quite a quick-paced relationship. The mother of Ravenel’s children, Kathryn Dennis, was unaware of the relationship, according to her, until they were shown meeting for the first time on Southern Charm. At this point, Jacobs had already moved in with Ravenel and had been spending time with their kids.

Over the course of the season, Jacobs has received a lot of hate from fans on social media and even fellow cast members. Jacobs, has taken to social media to defend herself and one Twitter user said that she claimed the show is scripted. Southern Charm star Shep Rose’s response to the claim was, “I’ve never spoken somebody else’s words on TV. I’ve said and done some dumb things. But I take full responsibility (however embarrassing).” Rose was actually filmed saying that he hates Jacobs on an episode of Southern Charm, while Rose is usually more of a keeper of the peace.

When it comes to the upcoming reunion shows for season 5 of Southern Charm, Jacobs does appear in order to defend herself. Host Andy Cohen said on Watch What Happens Live that it is definitely something to see. Ravenel will not be on the reunion episodes, as he is currently under investigation for two allegations of sexual misconduct and assault. Additional cast members who are not appearing at the reunion are Whitney Sudler-Smith and his mother, Patricia Altschul. Altschul always declines to appear on the reunion shows. Meanwhile, Sudler-Smith happened to have another work commitment at the time of the taping. 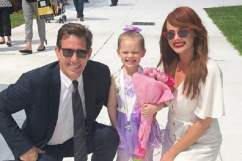 Read More
Reality TV, Southern Charm, TV
Thomas Ravenel and girlfriend Ashley Jacobs are headed for a split, according to reports. But, some of the other rumors include stories she's pregnant.