Tonight airs episode 7 of The Bachelorette 2018, but there will be a brief interruption for President Trump’s Supreme Court announcement, according to Fast Company. The announcement will come halfway through tonight’s Bachelorette episode, but Bachelorette fans shouldn’t worry. The full episode will be shown in its entirety tonight, despite the interruption. Watch the show as usual and it will pick right back up following the SCOTUS announcement.

If you do not have cable or can’t get to a television, you can watch episode 7 of The Bachelorette live online via your computer, phone or streaming device by signing up for one of the following cable-free, live-TV streaming services:

Who is your pick for Becca? #TheBachelorette

The official synopsis of tonight’s episode of The Bachelorette 2018 reads, “Becca and six bachelors take a trip to the Bahamas; Colton, Garrett and Blake get one-on-one dates with Becca; Becca joins the group for a game of beach volleyball; the Baha Men perform.” In addition, ABC revealed, “The first one-on-one date goes to Colton and the pair zoom around the beautiful blue waters in a catamaran and dive for conch shells. Their chemistry is off the charts … Garrett, another man with whom Becca shares a sizzling attraction, captures the next individual date. They thrill to a seaplane ride which transports them to a private island with a beautiful white sand beach … The final one-on-one date brings Becca and Blake some much needed alone time, which they haven’t had since the early weeks of the journey. They walk hand-in-hand on the beach and see a large group of people rocking out to the homegrown group Baha Men, performing their massive dance hit ‘Who Let the Dogs Out?’ as well as ‘Bumpa.'”

When it comes to the group date, the contestants who compete against one another are Leo, Jason and Wills. Only four men will move on to the hometown dates on the next episode. 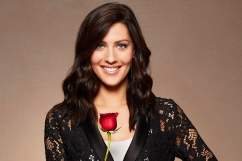