Tonight is the first live results show for America’s Got Talent 2018. Last night, 12 acts performed as part 1 of the quarter finals for the season and tonight, only 7 of them made it through to the next round. Read on for the live recap of what went down.

The Dunkin’ Save gets its first use of the season, with at-home viewers having the power to vote one of the acts in jeopardy through in the competition. Only one of three acts can be saved live. The followings acts that came in 6th, 7th and 8th place – the Angel City Chorale choir, the Junior New System dancers, and diabolo juggler Mochi – were eligible for the Dunkin’ Save. Those results are revealed at the end of the show.

After a video montage dedicated to the performers from last night, more results were revealed. The Pac Dance Team, the family band We Three and young rapper Flau’jae were the first three to find out if they were moving on or eliminated. The first act revealed as going into the semi-finals was We Three. Upon hearing they made it through, the three siblings were shocked and said they felt so honored.

@wethreemusic is feeling ? after America sent them to Semis! #AGT

Stand-up comedienne Vicki Barbolak and spitting variety act Human Fountains were the next to find out their fates on the show. Barbolak made it through and she was so overcome with emotion that she could barely speak. She cried in happiness as the judges joked with her about her “nasty trailer” jokes from the night before and judge Simon Cowell joked that he’d celebrate with her in her “nasty trailer” for making it through in the competition.

@vickibarbolak is ready to keep the chuckles coming in Semifinals! #AGT

Breaking up the results was a visit from last season’s winner, singing ventriloquist Darci Lynne. She put on a performance with one of her puppets to entertain the crowd. Currently, Darci Lynne is touring the country and has several tour dates coming up.

@courtneyhadwin and @amandamenamusic are continuing their climb to the big time! ⭐️ #AGT

Golden buzzer singers Amanda Mena and Courtney Hadwin were next in finding out their results … and they both made it through. After hearing the great news, the two teens embraced and thanked America for their votes. Judge Howie Mandel gushed over Hadwin, who was his golden buzzer choice. Next up were escape artist Lord Nil and magician Shim Lim, but only one of them made it through. Shin Lim was moving on.

It's no illusion, @shinlimmagic will see you in the next round! #AGT

And, it was down to the Dunkin’ Save candidates. Just before the results were revealed, the audience chanted Mochi’s name, but he was not America’s top pick. It was Angel City Chorale who made it through with America’s votes. Last night, they performed the song “This Is Me” from The Greatest Showman movie soundtrack.

America has spoken and @angelcitychorale is your #DunkinSave winner! #AGT

Then, it was the judges’ turns to vote for their pick out of Mochi and the Junior New System group. When deciding, judge Mel B gushed over Junior New System, who she has loved over the weeks. She then said that she’s watched last night’s show several times and has changed her mind to send Mochi through. Heidi Klum’s choice was Junior New System. Howie Mandel then noted that both acts have such passion and moving backstories, but he felt Mochi really stepped up his routine for his most recent performance. 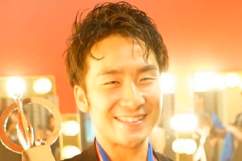