Ariana Grande is one of the performers at the 2018 MTV Video Music Awards, aka the VMAs, and, on her arm tonight is fiance Pete Davidson. The two sat side by side in the audience at the show and looked excited as they chatted in between performances. The couple also were spotted kissing on the red carpet and showing a lot of PDA.

Also on the red carpet, Davidson rocked a little beaded bracelet, with the initials AGD on it. Does this mean that Grande would change her last name when she marries Davidson? The two wouldn’t have secretly married without telling us, already, right?

Tonight, Grande performed her song “God Is a Woman” and she is also a nominee. During her performance, Grande’s brother, Frankie, took her place next to Davidson in the audience.

While presenting an award on stage, Tiffany Haddish joked about all the celebrities getting engaged lately. In response, Grande and Davidson jokingly looked at each other and nodded.

While Davidson showed a lot of affection for his fiancee tonight, there were others who gave Grande loving shout outs. When Nicki Minaj picked up the first award of the night, she mentioned Grande in her acceptance speech and said that she loves Grande so much.

In addition to performing tonight, Grande picked up the award for Best Pop. Upon accepting the award, she thanked her fans, as well as her co-workers. Grande also thanked her friends and family and then she said, “Pete Davidson, thanks for existing.” Davidson looked on with a smile on his face.

this is now an @ArianaGrande and Pete Davidson fan account ? pic.twitter.com/WdNUUaPwVo

Grande and Davidson, who have worked together in the past, on Saturday Night Live, got engaged in June 2018, not long after dating. They soon moved in together, into a $16 million NYC apartment that Grande picked up the bill for. Grande was also spotted rocking a $93,000 ring from her man, as reported by the NY Post.

The pair was first seen together in May 2018, at the Billboard Music Awards, when an attendee told People that, “After Ariana’s performance, they were backstage and he had his arm around her. They seemed very lovey-dovey. He was hanging out with her and her friends … She seemed quite smitten.”

Grande recently released her latest album, titled “Sweetener”. On the record, she actually has a song named after her future hubby. During an appearance on The Tonight Show Starring Jimmy Fallon, Grande said that when it came to the song, “I just made it and I sent it to him, and I didn’t know what to call it. So I just called it ‘Pete.’ It was either going to be that, or ‘This Is About Pete Davidson.’ I was like, ‘Why not?’ You know? You should be direct.”

And, despite some of the haters online, in regards to her relationship and naming a song after Davidson, Grande took to social media to defend herself. Grande wrote to a fan that, “He’s my fiancé. This is my album. I’m an honest and emotional artist and human being and if my openness in my work isn’t for you, that’s OK. I won’t be offended. Still wishing y’all all the love in the world.” 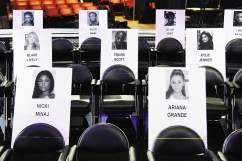 VMAs 2018 Presenters: Who Is Presenting at the MTV Video Music Awards?

Read More
Ariana Grande, Celebrities, MTV, VMAs
Ariana Grande and Pete Davidson attended the 2018 VMAs together. Get the details on her performance and the latest on the couple.