Ariana Grande’s fourth studio album Sweetener is set to be released at 9 p.m. PST on Thursday and midnight EST on Friday. If that is too late for you to stay awake, you can stream and listen to it at your convenience.

Generally, albums become available around midnight EST on streaming platforms like Apple Music and Spotify. This has been the case for Grande’s previous releases, 2014’s My Everything and 2016’s Dangerous Woman. On occasion, these platforms will throw a curveball at listeners.

Popular artists like Kanye West and Drake have encountered streaming issues with their latest releases. West’s ye was originally scheduled release on June 1 at midnight, but it wasn’t made available until the following afternoon due to tracklisting and artwork delays. A similar issue arose with Drake’s double album Scorpion. While it was released at the proper time (midnight) on Apple Music, the album wasn’t made available until 3 a.m. EST for Spotify users.

Grande has been teasing the release of her fourth album since November. “I didn’t mean to make an album, and I don’t know if it’s done at all, but I just have a bunch of songs that I really really like,” she told MTV. “I’ve been working a lot and have been creating and feeling inspired.” Grande released “No Tears Left to Cry” on April 20, and the lead single, inspired by the trauma of the Manchester bombing, peaked at number three on the Billboard Hot 100.

In May, Grande released the tracklist, which consists of fifteen songs and has guest appearances by Nicki Minaj, Pharrell Williams, and Missy Elliott. Williams, who also produces on the album, spoke with The Fader about Grande’s maturation as an artist.  “In all honesty, I feel like [after Manchester] was when different people from the record company actually started to understand what we were trying to do,” he said. “It’s unfortunate that that situation is what gave it context, but they were able to really see it then. And that’s the truth.” Grande later described Williams’ role in the making of the album as: “Part listener, part therapist, part stenographer.”

As far as Grande is concerned, Sweetener represents a turning point in her songwriting career. “I’ve always just been like a shiny, singing, 5-6-7-8, sexy-dance…sexy thing,” she told The Fader. “But now it’s like, ‘OK … issa bop — but issa message. Issa bop but also has chunks of my soul in it.”

The singer was embroiled in a Twitter spat recently, after an eager fan leaked photos of the album’s artwork. She responded to the photos by tweeting: “I mean if somebody’s gonna leak what my hard copies looks like please handle this first ….. please. this music is….. too good for this.” Grande added “Not this thumb” in a separate tweet, referring to the dirty fingernails of whoever is holding the album in the photo. 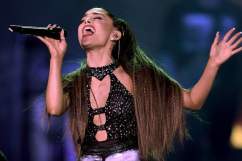 How to Stream & Listen to Ariana Grande’s ‘Sweetener’ Album