Becca Kufrin’s family was introduced to America when she appeared on Arie Luyendyk Jr’s season of The Bachelor. Over the course of that season, Kufrin talked about her father, Steven, who died in 2009, after a five-year battle with cancer. Luyendyk got to meet Kufrin’s mother, Jill, who is a cancer survivor; her uncle Gary, who has stepped in as a father figure; and her sister, Emily.

As Becca Kufrin enters the finale of The Bachelorette 2018, she brings her family members into her journey, to help her narrow down the final 2 cast members to her one true love. In the official ABC synopsis of the finale episode, it states, “Before the guys arrive in the Maldives, an emotional Becca is excited to be reunited with her family – especially her sister and best friend, Emily. Although Becca is deeply in love with both of these captivating men, she has not expressed those feelings to either of them and hopes her family will help her gain clarity about who would make a better husband.”

When it comes to each of Kufrin’s family members’ meetings with suitors Blake Horstmann and Garrett Yrigoyen, their interactions were a bit different. ABC reported that, in Yrigoyen’s case, “Garrett is the first man to visit and the couple is ecstatic to see one another. Despite Garrett being nervous about meeting Becca’s family, he is intent on proving himself to them. Becca’s Uncle Chuck has been the strongest male figure in her life since her father died. The hopeful suitor opens up to him about his divorce and what he has learned from his past mistakes. Emily warns him not to break her sister’s heart, but an emotional Garrett makes his case, explaining how much he loves Becca and wants to care for her forever.”

For Horstmann’s meeting with Kufrin and her relatives, “Her family is immediately impressed with Blake and his connection with Becca, but they do pick up on his concern about his competition. Nevertheless, Blake has no problem sharing his love for Becca with her mother.”

So, overall, what did the family members think of Horstmann and Yrigoyen?

According to People, Kufrin’s Uncle Chuck tells her, “You weren’t lying when you said, ‘I’ve got two keepers.’ While Kufrin’s family members felt Yrigoyen was a bit more of a risk than Horstmann, Chuck also said that Kufrin and Horstmann were very much alike. He explained, “You came in, you were bookends. You were a matched pair. I love the guy … I think Garrett just has a really beautiful soul, but I have to say he’s a little bit more of a risk.” Kufrin’s mother and sister agreed. As for any other concerns about Yrigoyen, Kufrin’s sister Emily said to her, “I want to make sure that he would keep challenging you.” 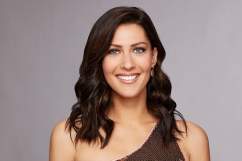 ‘The Bachelorette’ Winner 2018: 5 Fast Facts You Need to Know

Prior to the finale airing, Reality TV World reported that it seemed Kufrin’s family favored Horstmann over Yrigoyen.