Crazy Rich Asians has been receiving rave reviews from critics, many of whom are calling it the finest romantic comedy of the year. The Atlantic called the film “both a step forward for Hollywood and a throwback to the classic high-society comedy.” As with most hit releases, however, many fans are wondering whether the film has a scene after the credits.

Does ‘Crazy Rich Asians’ have a post-credits scene?

Yes, there is. There is brief scene during the film’s mid-credits that hint at a potential sequel. It’s worth sticking around to see, especially if you’re a fan of the Kevin Kwan book on which the film is based. If you haven’t read the book, be warned that there may be spoilers in the explanation given below.

After the credits for Crazy Rich Asians begins to roll, we cut to an engagement party for the main couple, Nick Young (Henry Golding) and Rachel Chu (Constance Wu). During that party, Nick’s cousin Astrid (Gemma Chan) locks eyes with a random man. The man is Charlie Wu (Harry Shum, Jr.). Charlie is a central character in the books, and its all but guaranteed that he will have a more prominent role if sequels are announced.

According to producer Nina Jacobson, the original cut of the film included more scenes between Astrid and Charlie, but they felt it would be best to wait for a sequel. “We had originally shot more of them together, but what we found when we first started to show the movie to audiences was that, just in terms of screen time, the dissolution of her marriage and then the introduction of this wonderful new guy actually both got short shrift when you rushed it,” she told Thrillest. “You felt like you weren’t getting the strength that it took her to walk away from her marriage, but also the hope that you might feel about a new person. And that it wasn’t just a rebound.”

“We’ll just tease [it] a little bit at the end and hope that audiences ask for more movies so we can continue to tell the story,” she concluded. Jon M. Chu, who directed the film, added: “This is not about getting the guy, ultimately, for both Rachel and Astrid. It’s about self worth.”

When asked about the chances of a sequel, Chu told E! Online that he was very hopeful. “You know, it’s up to the audience. If people show up that opening weekend, we would love to tell more stories,” he said. “We’d love to have other people tell their stories as well. We’ll see, but it’s up to the people who show up.”

In Kwan’s literary trilogy, Crazy Rich Asians is followed by Crazy Rich Girlfriend and Rich People Problems, so Chu and the cast will definitely have source material to pull from if the film lives up to its expectations at the box office.

In an interview with Business Insider, Kwan said he was overjoyed with the film adaptation. “It was all just a Herculean effort to make this happen, and I’m so glad we did,” he said. “We took our time and you see the results on the screen. It’s a fabulous, fabulous movie, which I really think will be an enduring classic.” 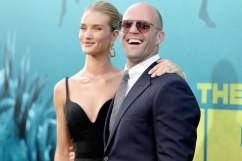 ‘The Meg’ End Credits: Is There a Post-Credits Scene?

Read More
Movies
Should you stay after the credits of 'Crazy Rich Asians'? Find out here.