Dallas Roberts co-stars with Debby Ryan and Alyssa Milano on the new Netflix series Insatiable. His role in the series, that of beauty pageant coach Bob, has led many viewers to draw comparisons between him and the late John Ritter, with whom he bears a striking resemblance. There has also been speculation as to whether Roberts, 48, is in some way related to Ritter, who famously starred on the 1970s sitcom Three’s Company.

Checked out Insatiable on @netflix and Dallas Roberts reminds me on John Ritter. pic.twitter.com/i1UECmq5q5

According to Roberts’ biography on Empire, the answer is no. There is no relation between him and Ritter, and they merely share a physical resemblance. Roberts has had to deal with comparisons to Ritter for most of his career, however, and the two have often been included on lists of celebrity look-a-likes. There was even a time when he was incorrectly listed as one of Ritter’s sons on Wikipedia. In 2015, a myLot user reports that Roberts was written in as the child of Ritter and Catherine Roberts on the former’s profile.

Roberts was born on May 10, 1970 in Houston, Texas. According to the Herald Tribune, his mother is indeed named Catherine, but his father, a methodist minister, is named Don Roberts. Roberts also has a younger brother named Brian, who admires the bravery that he shows in his acting career.

"I help ladies become their best selves. I have an insatiable need to win." Bob Armstrong. Attorney at Law. Disgraced beauty pageant coach.

“I have a healthy fear of the world, a need to make sure things are safe,” said Brian. “Dallas doesn’t have those inhibitions. He’s always known what he’s wanted, and he’s gone for it. He’s a wonderfully quirky guy, and I love him to death. I’m his biggest press agent — always putting his reviews and pictures on the wall at work.”

Ritter had four children between his two marriages. He married actress Nancy Morgan in 1977, and they gave birth to Jason, Carly, and Tyler Ritter before divorcing in 1996. Ritter went on to marry actress Amy Yasbeck on September 18, 1999, at the Murphy Theatre in Wilmington, Ohio. They have one daughter, Noah, and remained married until Ritter’s death in 2003. He was 54.

Like Roberts, Ritter’s children have also pursued careers as entertainers. Jason Ritter, 38, has appeared on shows like Parenthood, Gravity Falls, and Another Period. Carly Ritter, 35, is a singer/songwriter who released her self-titled debut album in 2013. Tyler Ritter, 33, has appeared on shows Modern Family, Agents of S.H.I.E.L.D. and NCIS, and led the CBS sitcom The McCarthys for two seasons.

Roberts is currently married to scenic designer Christine Jones, and they have two children together: Pilot Roberts and Ever Reverend Roberts. 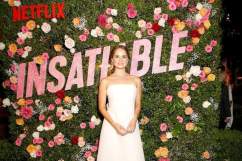 Netflix’s ‘Insatiable’: Will the Show Return for Season 2?

Read More
Netflix
Many viewers have wondered whether 'Insatiable' actor Dallas Roberts is related to the late John Ritter. Find out here.