Season 2 of the reunion reboot of Jersey Shore, titled Jersey Shore: Family Vacation, premieres on August 23, 2018 and the MTV show may already be gearing up for a third season. You can catch up with original Jersey Shore episodes, which you can find here, along with new episodes as they air. You will need to sign in with your TV provider in order to access the shows. There are also countless hours of reruns airing on the MTV network throughout the weeks. Plus, we have some free options for those without cable below. Get the rundown on how to watch the show online, what time it airs and more details below.

JERSEY SHORE TV CHANNEL: As always, Jersey Shore airs on the MTV network. Some may be confused after a reunion episode with several of the cast members aired on the E! network, prior to the birth of Jersey Shore: Family Vacation, but the show is MTV all the way.

LIVE STREAM: If you don’t have cable or can’t get to a TV, you can watch a live stream of MTV on your computer, phone or streaming device by signing up for one of the following cable-free, live-TV streaming services:

MTV is one of the 40 channels included in Philo’s main bundle, which is the cheapest among all streaming services if you plan on keeping it long-term. Not only that, but you can sign up for a free trial without having to enter any billing information. You’ll get two days for free right off the bat, then if you enter your billing information after that, you will get an additional five more days free. After signing up, you can watch the show live on your computer via the Philo website, or on your phone, tablet or streaming device via the Philo app.

Additionally, if you can’t watch Jersey Shore episodes live, Philo also allows you to DVR programs and watch them up to 30 days later. And even if you forget to DVR something, Philo also comes with a 72-hour rewind feature, which allows you to replay any show or event that has aired in the last three days.

CAST: Deena Nicole Cortese, Paul “Pauly D” DelVecchio, Jennifer “JWoww” Farley, Vinny Guadagnino, Ronnie Ortiz-Magro, Nicole “Snooki” Polizzi and Michael “The Situation” Sorrentino, are all back. Former cast member Angelina Pivarnick will again make an appearance this season. Significant others of the cast members will also be shown, along with some of their kids.

Some of what viewers can expect to see on the show this season, is Mike “The Situation” front and center with his tax fraud case, as he tries to plan his wedding with Lauren Pesce. The ghost of Ronnie & Sammie’s relationship is always lurking, but a big issue this season is Ronnie’s volatile relationship with the mother of his baby, Jen Harley. Deena Cortese reveals this season that she is pregnant, and she is currently still expecting her baby.

Last season on the show, DJ Pauly D was the only single person in the group, but this season, he has his wingman Vinny Guadagnino back, as Guadagnino is single. 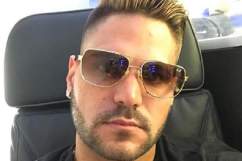 Ronnie Magro and Jen Harley Break Up After Daughter’s Birth