Jordan Kimball appears to have luck on his side, on Bachelor in Paradise, catching the eye of a couple women this season. But, before we get into all the details, THIS IS YOUR MAJOR SPOILERS WARNING. If you do NOT want to know Kimball’s fate on the show or what happens to any other cast members on BIP5, STOP READING NOW.

In paradise with Kimball for season 5 is his enemy from The Bachelorette 2018, David Ravitz. And, the rivalry between them has definitely not died down. On episode 2 of BIP5, Ravitz sits down with Annaliese Puccini, who had been getting romantic with Kimball, to warn her against investing any feelings in the male model. Puccini maintains that she will be taking everything “with a grain of salt”, while Ravitz said that he just wanted to make sure Puccini doesn’t fall for the wrong guy. He also tells her that he does not believe Kimball is on the show to find love.

But, Kimball may have partly proved Ravitz wrong, since Reality Steve has reported that he gets engaged on the show. Prior to the start of the season, Kimball revealed in an interview with Refinery29 that, “I do find someone for me in Paradise. It ends on a very good note.”

On episode 3 of BIP5, cast member Jenna Cooper arrives and is a breath of fresh air to Kimball, who takes immediate interest. As for what happens to Puccini, Reality Steve has reported that she gets into a relationship with Kamil Nicalek by the end of this season. Nicalek has not yet shown up in paradise.

Also before filming, Kimball named a few women he’d be excited to see in paradise and Cooper was one of them. Kimball told Us Weekly that Cooper was “just the right type of personality for me … She’s like a California dream kind of style: blonde hair, blue eyes.” Kimball was also excited to meet Kendall Long and Krystal Nielson.

Interestingly enough, Nielson gets engaged to Chris Randone on the show this season. Nielson and Randone, along with Kimball and Cooper, are the only couples in the cast to get engaged this season, according to Reality Steve. Two alums get engaged as well, though. Ashley Iaconetti and her longtime crush, Jared Haibon, return to paradise as a couple, after several years of Iaconetti pining for Haibon. Once in paradise, Haibon gets down on one knee. So, technically, three couples get engaged this season on Bachelor in Paradise. 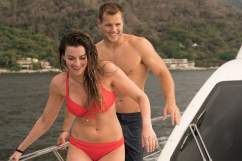 Read More
Bachelor In Paradise, Reality TV, TV
Jordan Kimball showed interest in Annaliese Puccini on Bachelor in Paradise until Jenna Cooper showed up. Get the BIP5 spoilers one each of them.