Instagram/Kim Kardashian Kim Kardashian revealed a new type of accessory on Monday morning: a glowing, implanted necklace that she alleges to glow to the beat of her heartbeat.

Kim Kardashian posted multiple pictures of what appears to be a glowing necklace that was implanted beneath her skin on Monday, August 27. According to TMZ, the necklace is a part of an ongoing art installation called “A. Human” that was created by artist Simon Huck.

You can check it out in the video below:

In the video, Kardashian can be heard saying, “My necklace glows like a heartbeat. It moves to the rhythm of my heartbeat.” In the next story, she says, “Thank you A. Human.”

TMZ reports that A. Human has also featured “Queer Eye” star Tan France, as well as transgender supermodel Andreja Pejic, in the skin installations. A. Human is set to open for one month as an interactive art experience in New York City, starting on September fifth.

In conversation with Vogue, Huck said of his creations that it was about twisting the concept of changing your body for an ideal. He said, “We didn’t want to root any of our modifications on the idea of existing insecurities or discomforts [like collagen or lip fillers]. A. Human is about the freedom to explore this world and live in this world in any way you choose.”

He added, “When you think of the future, you think dark, dystopian—there are all these images that come to mind. I didn’t want to create a utopian world, but I definitely wanted to create a world that was optimistic or, at the bare minimum, neutral,” he says. “We wanted to use the future of fashion and the future of self-expression as a way to look at the future. That is how the ethos of A. Human formed.”

Huck is reportedly a longtime friend of the Kardashian clan, per Vogue.

Shoes are so 2017. Embrace your golden ratio ? with the A. Human Nautilus SS19 ?, the first entry into our biological heel series. Experience them all on display at our NYC flagship showroom. Tap the link in the bio to reserve your appointment today. ✌?✨?: @lukeabby . . . ahumanbody.com #ahuman #nyfw #ss19 #fashionweek #newyorkfashionweek #nyfashionweek

It’s unclear how the devices work, exactly, and for how long Kardashian intends to wear the glowing necklace. However, it is confirmed that Huck’s installations are prosthetics, rather than anything that is embedded beneath the skin. But for now, it’s certainly going to add a boost of attention to her Instagram feed. 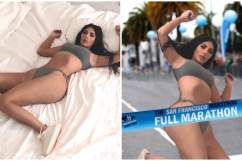