Kyle Pavone, the co-lead singer of metalcore giants We Came As Romans, has died at the age of 28. No cause of death has been made public. TMZ reports that on August 19, Pavone was rushed a to a hospital in his native Michigan. A toxicology report is pending.

In a statement released via Twitter on August 25, his bandmates said, “Today, music lost another great with the passing of Kyle Pavone of We Came As Romans. Kyle’s tragic loss came too early in his life and those of his bandmates. All are devastated by his passing. We will miss his smiles, his sincerity, his concern for others, and his impressive musical talent. In lieu of flowers, we will be providing information regarding charity donations this coming week. The family and the band wish to thank their fans and the music community for all of their love and support as they navigate their grief.

Will I be Remembered or Will I Be Lost in Loving Eyes?”

1. Pavone Recorded 5 Albums as We Came As Romans Frontman

Absolutely nothing going my way today ?

Pavone, a native of Detroit, joined the band in 2008. He recored five albums with the group. In addition to vocals, Pavone was a keyboard player. He shared vocalist duties in the band with Dave Stephens. Stephens described the pair’s process in a 2016 interview with Loudwire, “Yeah, everyone contributed in one way or another more so than on our last records. It’s hard to say if there’s a big theme on the record because every song is so different, lyrically, too. Josh [Moore] and I were both kind of going through hardships – Kyle does a lot of the programming but Josh and I do a lot of the lyrics and him and I were in the same place mentally, just going through some rough times.” During the same interview, We Came As Romans fans are described as “die-hard.” Pavone asked about their reaction to him dying his hair blonde, he said, “t’s something I’ve wanted to do it last summer and I never really got around to doing it and they wanted me to do it the very bad way with the L’Oreal dye and what not and I was like, “I’m not going to do that.” 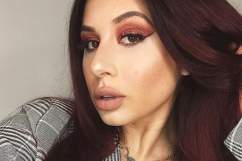 Did Kyle Pavone Have a Girlfriend?

2. Pavone Joined the Band in 2008 After the Departure of Chris Moore

According to the Detroit News report on Pavone’s death, the band formed while they were students at Troy Athens High School. Pavone joined after the departure of original frontman, Chris Moore. The band released their latest album, Cold Like War, in 2017.

On August 18, Pavone tweeted, “Will I be remembered or will I be lost in loving eyes,” the lyrics from the band’s song, “Promise Me.” Pavone his following message simply read, “F***ing great.” According to his Twitter bio, Pavone was also a producer.

During an October 2015 show in Nashville, Pavone was badly hurt when he was hit in the eye by a guitar. Pavone was rushed to a local hospital after the incident for treatment.

3. Pavone Said in 2015 that He Would Rather be ‘Artistic then do the Same Cookie-Cutter Thing’ All of the Time

I love this picture so much because it shows you how I’ll always remember you. The craziest, goofiest, most funny and lovable kid. I miss you so much.

During a July 2015 interview with the Detroit Free Press, Pavone said of the band’s evolving style of music, “Either people complain about you sounding different or people complain about you making the same music. I’d rather take a dive and be artistic than be the same cookie-cutter thing we’ve been for the past eight (or nine) years… There are more issues we want to bring up (in songwriting) and we’re not afraid to bring up those issues anymore. We’re not trying to hold back on what we’re really thinking.”

4. In November 2017, Pavone Was Accused of Assaulting a Fan

In November 2017, Pavone was accused of physically abusing a fan at a festival three years previous. In a now-deleted tweet, a female fan wrote, “I feel physically sick with anxiety writing this but Kyle from WCAR physically assaulted me at a festival 3 years ago. I finally feel like it’s an appropriate time for me to say this due to everything that’s come out lately that’s made me realise ppl shouldn’t get away with this.” On the day of Pavone’s death, that fan wrote on Twitter, “Oh boy.” The same fan retweeted a message that included a link to an article about Pavone’s passing. That retweeted message said, “I cannot put into words what I am feeling right now.” A Reddit thread on the allegations was locked “due to overwhelming lack of civility.”

5. Pavone’s Death Has Resulted in an Outpouring of Emotion From His Peers & Fans Alike

As news of Pavone’s tragic passing spread, Twitter became awash with fans and peers paying tribute to the singer. Here are some of the most poignant messages:

REST UP KYLE PAVONE THIS IS WHY WE GOTTA LISTEN, BE AWARE & TRY AND HELP ALL FRIENDS BATTLING ADDICTION WECAR DID A INTERVENTION FOR ME ON 2013 WARPED TOUR ILL NEVER FORGET HOW KIND ALL OF THEM TREATED ME IM VERY SORRY FOR YOUR LOSS.

after finding out the horrible news about Kyle Pavone, I think it’s only right to listen to We Came As Romans all day. That band was my favorite band in one of the hardest times of my life and i honestly can’t believe what’s happened and i’m speechless tbh so i’ll end it here

Today the world of music lost a great talent. From the start of this band, and still to this day, We Came As Romans has served as a big influence on all of us. RIP Kyle Pavone. pic.twitter.com/tlp8DC1hLv

My future started with the first note that I ever played. Rest In Peace Kyle Pavone.

RIP Kyle Pavone you will be missed. I remember you taking me on the bus and playing me the UWWGTB first mixes. Sad day in music, thoughts go out to the family and the rest of the dudes

I’m absolutely devastated to hear about the passing of Kyle Pavone of We Came As Romans. A great friend of the show and a guy who always kept it light and silly on tour. Not to mention a tremendous talent in both singing and producing his own music. Absolutely terrible. RIP.

R.I.P Kyle Pavone. My deepest condolences to the WCAR family today, they have been nothing but good to us.

Wow. RIP @kylepavone we were just talking a few days ago about writing some music together. Fuck

“And our vision for this world Will not die when we are dead” I will be listening to WCAR all day. Rest easy @kylepavone

I can't thank enough for for blessing me with your talent and your charming voice.
Today the sky wins one more star, the brightest of all, thank you
I'll see you soon <3 @kylepavone