When Margot Kidder passed away at the age of 69 in mid-May, her cause of death wasn’t immediately known. The rumor was that she died from the flu because she had been fighting the flu and talking about flu symptoms just days before her death. But now her daughter, Maggie McGuane, has revealed that her mom committed suicide.

Park County Coroner Richard Wood said in a statement that Margot Kidder died “as a result of a self-inflicted drug and alcohol overdose,” The Chicago Sun Times reported. The coroner did not specify which drugs she took, TMZ reported.

Maggie McGuane told the Associate Press that she knew her mom died from suicide after she went to her mom’s home on May 13, the day her mom died. But she didn’t say anything until the coroner released an official statement. Now she feels that the news being out is a big relief to her, The Chicago Sun Times reported. She believes it is important to be open and honest about suicide and not hide it. She wants to avoid any “cloud of shame.”

Margot Kidder passed away at her home on May 13, 2018 in Montana. She was still in good enough health to be taking on stage roles, including The Vagina Monologues on Broadway. She also had two more roles yet to be released, TMZ reported. Her obituary at the time said simply that she passed away at her home, and does not mention her cause of death.

But Kidder had a history of mental illness. She had been struggling with bipolar disorder for years. In 1996, she was briefly homeless during her struggle and she became a very public advocate for mental health. Since the 2000s, her acting career had picked back up again and she was starring on Smallville, Brothers and Sisters, the L Word, R.L. Stine’s The Haunting Hour, and she was appearing on Broadway.

The rumors that she had died from flu complications began because of her phone interview with The Drew and Mike Show in Detroit, just four days before she died. During the interview, she said that she was in bed with the flu, and her voice sounded rough and raspy. She said she was “puking every hour and a half” and the flu was “not fun,” TMZ reported. You can listen to the interview below.

Maggie McGuane was Kidder’s only daughter. She was born to Kidder and her first husband, novelist Thomas McGuane. Maggie was born on October 28, 1976. Maggie has worked as a photographer, a writer, and occasionally modeled. She’s also an activist for many causes.

When I was a little girl my mother told me God was short for all the goodness in the world. I'm pretty sure I saw God this last week. Thank You Texas.

She told AP: “It’s a very unique sort of grief and pain. Knowing how many families in this state go through this, I wish that I could reach out to each one of them.” 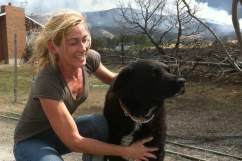