After Mercedes “MJ” Javid’s father, Shams, suffered a stroke, his health seemed to continue to go downhill. Sadly, Shams Javid died in May 2018, almost a month after the wedding of his daughter MJ, to her husband Tommy Feight. Over the years, MJ has had a rocky relationship with her mother, Vida, who some of her Shahs of Sunset cast members have even criticized. Vida has never been one to shy away from insults or criticisms of her daughter, whether it’s about MJ’s weight, her lifestyle choices, or her love life. For months, Vida was very disapproving of MJ’s relationship with Tommy. Even so, Vida was, of course, a big part of the wedding and seems to be getting along much better with her daughter’s new husband.

Recently, MJ spoke with The Daily Dish about how her mom has evolved since the passing of her former husband, Shams. MJ revealed that, “My mom, she has become a little more nurturing. I think because she also suffered the loss of him and wasn’t expecting it. So now that it’s happened, I think that she’s much nicer. I think that she’s taking the role of what he provided as well. She provided the torture, and he provided the love, so now she’s trying to do what he used to do.”

Growing up, MJ told the Huffington Post that it was her father who primarily raised her. She said that he greeted her every day with happiness and that he was her best friend. MJ opened up, saying, “What a lot of people don’t know was that my dad was the ‘single mom’ raising me. He’s the quieter person not featured on the show. He has always been my best friend, the one who picked me up from school, nursery through college. My friends and I would walk over and tell my dad everything, so now talking about my dad is important to me.”

Despite all the issues that MJ has had with her mom, just a couple days before the announcement of her dad’s passing, MJ posted a heartfelt message on her Instagram account, in support of Vida for Mother’s Day. MJ wrote, “Happy Mother’s Day to the woman who created me. Yes, she can be tough. Yes, she works every day. She is my mom and I will have her back until the day I die.”

Happy Mother’s Day to the woman who created me. Yes, she can be tough. Yes, she works every day. She is my mom and I will have her back until the day I die. ??? #bravotv #shahs #shahsofsunset #Vida photo cred cousin @max_emadi_

Prior to the death of MJ’s dad, she was shown fighting with her mom on season 6 of Shahs of Sunset, for not seeing Shams enough. Vida revealed that she was suffering with the situation and it was hard for her.

When it comes to the new season 7 of the show, MJ and her family are shown dealing with her dad’s ailing health and gearing up for their wedding, which took place on April 21, 2018. The official Bravo plot description for MJ’s storyline this season reads, “After a string of false hopes and rounds of therapy, MJ is poised to marry her Prince Charming Tommy in true Shahs fashion. Her pre-wedding glow is dulled, however, when her opinionated mother Vida gets involved and her father’s health begins to rapidly decline.”

Who do i look more like? My sweet daddy Shams or that fierce Ms Vida? #familyovereverything that is my handsome cousin Babak looking like a little prince #padeshah 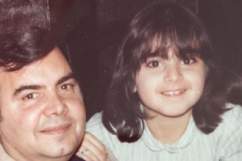