Getty The cast of 'Mile 22' at the premiere.

Mile 22 is the latest release to pair actor Mark Wahlberg and director Peter Berg. The duo previously collaborated on the action films Lone Survivor, Deepwater Horizon, and Patriots Day. Given the commercial success of these films, many fans are wondering whether they should stay after the credits to see if there’s an extra scene.

Does ‘Mile 22’ Have a Post-Credits Scene?

Unfortunately, the answer is no. There is not a post-credits scene after Mile 22. There has, however, been talks about a potential sequel. CinemaBlend reports that screenwriter Umair Aleem has already been hired to write the a script for the Mile 22 sequel, which is currently untitled. Aleem is best known for writing the actions films Extraction and Kate, which is currently in pre-production. Graham Roland and Lea Carpenter penned the first film, and its unclear whether they will be involved with the writing process moving forward.

Ironically, when asked about the inspiration behind making the film, Wahlberg told News Boston that he wanted to tell an original action story. “You know, what we want out of this movie in a summer full of sequels is a really original kick-butt movie, that’s smart, character-driven action movie that will leave you on the edge of your seat,” he said. “[Me and Berg] love each other. We bring the best out of one another.”

The Oscar nominee told that telling a fictional story was also part of the appeal. “We had given up so much energy, and the movies that we had made before were so intense These real-life tragedies,” he told CinemaBlend. “It was like, ‘Let’s just do something where we can kind of just go off and have our own kind of fun.’ Make it just a little less intense and draining.

While it remains to be seen whether Wahlberg will sign up for the sequel, he and Berg did appear at last year’s CinemaCon, where STX Chairman Adam Fogelson announced that they had tentative plans to make a Mile 22 trilogy. “Mark and I have made three films now that are pretty heavy, to put it mildly,” he said. “For us, to do Mile 22 and something that’s fictional, and what we hope to be an intelligent, adult action film that’s got a lot of muscle and intensity…It’s a piece of fiction we’re very excited about it. We’re coming at you with a big a*s action movie.”

There is also the matter of the film’s ending, which leaves things purposely open for future stories. We won’t delve too far into spoilers here, but you can get a complete rundown of the final act and the questions it poses right here at Den of Geek. Actors who are expected to return for the sequel are Lauren Cohan, Ronda Rousey and Iko Uwais, an Indonesian actor who first gained attention for starring in 2011’s The Raid.

In addition to the trilogy of films, STX is said to be planning a “scripted TV series and VR component” related to Mile 22.  STXsurreal, a division of STX Entertainment, recently announced The Kiev Exchange, which is described as a short-form, live-action spinoff. According to Slash Film, Aleem will write and Berg will likely direct. 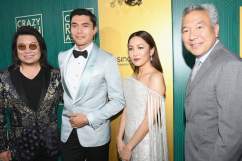 ‘Crazy Rich Asians’ End Credits: Is There a Post-Credits Scene?