National Dog Day is Sunday, August 26, 2018. Dogs are the most popular pets in America; nearly half of U.S. families own at least one. And researchers have found that dogs became man’s best friend thousands of years earlier than scientists originally thought.

1. No Offense to Cats, but Dogs Are Far More Popular as Pets in the United States

Approximately 60 percent of Americans own a pet. That includes dogs, cats, fish, horses, etc. According to research by Gallup, 44 percent of people in the U.S. own a dog, while 29 percent have a cat.

The poll also found that when analyzing pet owners alone, 73 percent of those people have a dog. 49 percent of all pet owners have a cat. (Remembering, of course, that many of those questioned could own both a dog and a cat).

Millions of dogs and cat are rescued from animal shelters each year as well. The American Society for the Prevention of Cruelty to Animals estimates that about 3.3 million dogs enter shelters every year. Of those, about 1.6 million are adopted.

We love our kiddos #NationalDogDay pic.twitter.com/pVkCarGE8o

A 2015 survey revealed that 32 percent of Americans believe that animals should be given the same protections under the law as people. That’s up from 25 percent in 2008. Only 3 percent of those surveyed responded that animals do not need to be protected from harm because “they are just animals.”

2. Labrador Retrievers Are the Most Popular Breed of Dog Among Americans

GettyReggie, a Labrador Retriever, is pictured during a press conference by the American Kennel Club (AKC) in New York on March 21, 2017, to announce America’s top ten most popular breed.

The American Kennel Club keeps track of which specific dog breeds families take home each year. The organization’s Most Popular Dog Breeds list of 2017 found that, once again, Labrador Retrievers were the favorite among U.S. families.

Labradors have been at the top of the list for more than 20 years. Labradors are known for being intelligent dogs, and considered great pets for families with children. Kennel Club President Gina DiNardo said in a statement in 2016, “The Lab is such a versatile dog that it’s no wonder it makes a great companion for a variety of lifestyles.”

Another idea for why labradors are so popular: more Americans have the space for larger animals. According to an article in Slate, it may have to do with the fact that American homes are much bigger than they used to be. Since the early 1970s, U.S. houses have 55 percent more square footage and, more often now, fewer children. The magazine noted that prior to the Labrador retriever, cocker spaniels and poodles dominated the list of most popular breeds. The poodle was ranked #1 for 25 years.

3. A Majority of Americans Believe Owning a Dog Improves Their Outlook on Life

The Gallup poll referenced above also found that 60 percent of Americans believe that owning a pet can improve a person’s outlook on life. 6 in 10 say that pet owners lead more satisfying lives than people who do not have a pet. One-third of those surveyed believe it makes no difference whether a person owns a pet or not.

Another interesting tidbit: far more Americans relate more to dogs than cats. 70 percent of those surveyed responded that they are “dog persons.” Only 20 percent described themselves as “cat persons.” Those numbers are consistent even among non-pet owners. 68 percent of non-pet owners say they prefer dogs over cats.

Researchers have also found that owning a dog can possibly improve both physical and mental health. Dogs can help decrease stress, lower blood pressure and increase serotonin levels. And anyone with a dog has likely noticed that these animals tend to be very well attuned to humans’ emotions.

The Director of the Research Center for Human Animal Interaction at University of Missouri, Rebecca A. Johnson, told NBC News that human beings have a natural longing for connection. Dogs can provide that. “We live in a high-tech, low-touch world and people have a longing for a bond with nature… When we see, touch, hear or talk to our companion animals beneficial neurohormones are released and that induces a sense of goodwill, joy, nurturing and happiness.”

4. Money-Wise, Dogs Are Actually Pretty Low-Maintence Compared to Other Species of Pets

It's the best day of the year! Happy #NationalDogDay pic.twitter.com/Y3oMzA1ZEJ

According to a recent survey by OppLoans, Americans spend more on small mammals such as gerbils and guinea pigs than they do on cats and dogs. Those small creatures are requiring about $250 per month. Dogs owners are dishing out about $139 per month on their furry friends. Cats, however, are far more low-maintenance, with their owners spending about $92 monthly on them.

Not surprisingly, horses are the most expensive pets in the United States. Boarding a horse typically costs about $500 per month, but can be as expensive as $1,500 per month. In addition to that, the American Association of Equine Practitioners estimates that horse owners spend about $2,500 per year to keep a horse healthy.

Back to dogs– Americans have maintained a tradition to making sure the dog is included on Christmas morning. Getting the dog a holiday present has been a regular occurrence for decades. 68 percent of Americans typically buy gifts for their pets on Christmas. In 1990, the percentage was similar: 65 percent.

The widely-held conclusion among scientists used to be that dogs were domesticated about 15,000 years ago. The belief was that people living in Eastern Asia began keeping dogs as pets around the same time that they began farming.

But new findings suggests that dogs were keeping humans’ company as far back as the Ice Age in Europe, between 19,000 and 32,000 years ago! Researchers in Finland came up with this conclusion after comparing ancient fossils of dog-like animals with the DNA of modern breeds of dogs, wolves and coyotes. The idea is that dogs may have been attracted to hunters and their extra slabs of meat. The dogs could then have been used to help hunt and for protection.

Archaeologist and geneticist Greger Larson also lays out a theory that dogs were possibly domesticated twice. After comparing DNA and ancient fossils, and studying animal bones buried in Ireland, Larson theorized that domestication happened independently in both western Eurasia and much further East. His theory is that as dogs (and their humans) migrated west, the dogs mated with the native western dogs and essentially replaced them. (You can read more about Larson’s studies here). 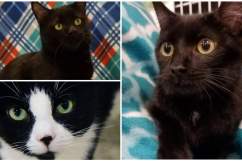