Neil Simon was a playwright, screenwriter, and Pulitzer Prize winner, according to The Washington Post. On the morning of August 26, 2018, Simon died, at the age of 91, leaving behind three children and his wife, Elaine Joyce, as reported by TMZ. Simon was known for his hit works “The Odd Couple” and “Biloxi Blues,” among many other books and plays.

Simon died at 1 a.m. ET, after being put on life support. TMZ reported that he had a failing kidney and was also suffering from Alzheimer’s and dementia. In 2004, Simon had received a kidney transplant and his longtime friend, publicist Bill Evans was the donor.

Elaine Joyce married Neil Simon in 1999. Get to know more about Joyce, the life she shared with Simon, her past loves and her children in our facts below.

According to TMZ, Neil Simon was married five times. He was first married to a dancer named Joan Baim, but she died after 20 years of marriage to Simon, passing away from cancer in 1953, as reported by Playbill. He went on to marry actress Marsha Mason, who some may know from movies like Drop Dead Fred. His third wife, Diane Lander, he married twice. The two got divorced and remarried not long after the divorce was finalized.

Joan Baim had two children with Simon – Nancy Simon and Ellen Simon. Baim died on July 17, 1973 of bone cancer when Ellen was just 16 and Nancy 10 years old. Baim was 41 years old when she succumbed to the disease and Ellen recalled to People that, “All the adults were so upset. I had to be the strong one.” Neil Simon married wife Marsha Mason just three months after Baim’s death.

Unfortunately, her mother’s death at a young age was not the only pain Ellen had to go through. In 1987, Ellen Simon’s husband was hit by a car and died, according to People.

Bobby Van was known for his musical acting on Broadway and he was married to Joyce from 1968 to 1980, because, in 1980, Van died from brain cancer. Just one year prior to his death, Van was diagnosed with a malignant brain tumor. On the Sally Jessy Raphael talk show, Joyce revealed that Van had suffered 13 days of headaches prior to getting the tumor tested. He then battled the cancer for about a year until he passed away.

Joyce and Van actually appeared together on the 1970’s game shows including Tattletales and Match Game. Joyce appeared on several other game shows as well, including Password.

Prior to meeting Joyce, Van was married to a starlet named Diane Garrett. According to IMDb, Garrett was known for movies including The Pace That Thrills (1952) and Stop That Cab (1951). Together, they adopted a son named Peter. Their marriage lasted from 1952 to 1962. Garrett died in 2011.

John Levoff was Elaine Joyce’s second husband and they were married from 1985 – 1992. In his career, Levoff produced several TV Movies, including The Revenge of Al Capone, 83 Hours ‘Til Dawn and A Family Torn Apart, as reported by IMDb.

Joyce was in the movie and TV business as well, acting in many musical films, as well as Broadway shows. Some of the musicals she appeared in were The Music Man, Bye Bye Birdie, and Funny Girl. She also appeared on soap operas including The Young and the Restless and Days of Our Lives. Joyce also made appearances on The Andy Griffith Show, Charlie’s Angels, Green Acres, Hawaii Five-O, and The Feather and Father Gang, as well as many other shows.

Like ex-husband Levoff, Joyce also got involved in producing. According to My Life, after his marriage to Joyce, Levoff remarried and became the President of New Frontier Entertainment.

4. The Couple Had No Children Together

GettyNeil Simon and Elaine Joyce attend the Broadway opening night of “Cabaret” at Studio 54 on April 24, 2014 in New York City.

Neil Simon had three children, while Joyce had two, but they did not have children together. Joyce had kids from her first two marriages and they were daughter Taylor Van and son Michael Levoff.

In 2003, Joyce’s daughter, Taylor Van, married husband Evan Gray Meyer at the Beach Club in Santa Monica, California, according to The NY Times. Like her parents, Taylor also works in the entertainment industry. At the time of her wedding, she was an executive assistant in the TV distribution division of Paramount Pictures in Hollywood, California.

Michael Levoff spoke out on Twitter, following the death of step-father Neil Simon. In a heartfelt message, Levoff wrote, “Thank you for all the nice notes of condolences. Neil made millions of people around the world laugh and cry – and everything in between. He will be missed and certainly never forgotten.”

5. There Are Rumors That Joyce Dated Author J.D. Salinger

A January 28, 2010 photo shows a copies of “The Catcher in the Rye” by author J.D. Salinger at a bookstore in Washington, DC. J.D. Salinger, the reclusive author of “The Catcher in the Rye,” died at 91, his agent said January 28, 2010, raising tantalizing questions over whether the legendary writer might have left behind a hoard of unpublished works.

In 1982, Joyce was performing at the Alhambra Dinner Theatre in Jacksonville, Florida, when she said that famous author J.D. Salinger attended one of her shows to meet and hang out with her. She said that Salinger had been calling and writing her letters for months. When Joyce was doing the short-lived television series Mr. Merlin, she recalled to The NY Times, “I was doing a series and he wrote me a letter. I get fan mail all the time, but I was shocked. I really didn’t believe it. It was a letter of introduction to me about my work.”

Joyce said she and Salinger wrote each other often and eventually began a relationship. She also said, “We were very, very private, but you do what you do when you date — you shop, you go to dinner, you go to the theater. It was just as he wanted it.” Joyce also added, “We were involved for a few years all the way through the middle eighties. You could say there was a romance.”

Salinger died at the age of 91 years old, in early 2010. Salinger’s representative, Harold Ober Associates, announced the news, stating to The NY Times that, “Despite having broken his hip in May, his health had been excellent until a rather sudden decline after the new year. He was not in any pain before or at the time of his death.” 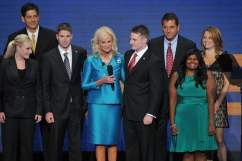 How Many Children Did John McCain Have?