Nicki Minaj has finally released her studio album Queen. The album arrives after much hoopla regarding its release date and tracklist, but now it seems, Minaj is getting attention for the song “Barbie Dreams,” where she takes aim at ex-boyfriend Meek Mill and several other male rappers.

On “Barbie Dreams,” which flips the instrumental and concept of The Notorious B.I.G.’s 1994 track “Just Playing (Dreams),” Minaj rattles off bars that mock previous relationships with Mill and Drake, who she’s rumored to have dated in the past, and young emcees like Desiigner, Tekashi 6ix9ine, and Young Thug. Preview the track below and check out all the lyrical references she makes after the jump.

“Drake worth a hundred milli, always buying me s**t,” she raps. “But I don’t know, the p**sy better if he’s crying and s**t.” Drake and Minaj have had a complex relationship over the years, as the two were rumored to have been an item around 2010, when they got “married” on Twitter and appeared as a couple in the music video for the latter’s single “Moment 4 Life.”

Minaj’s attack is even more surprising given that Drake sampled her on his latest album, Scorpion, and the two recently appeared on Instagram, suggesting that they had mended fences.

“Meek still be in my DMs, I be having to dump him,” she raps about Mill. “I used to pray for times like this / Face a*s when I f**k him.” Mill and Minaj split up at the beginning of 2017, and the fallout of their relationship was publicly messy.

The two emcees dissed each other regularly (check out “Regret In Your Tears” below), and Mill even sided with Remy Ma after Ma feuded with Minaj last summer.

“Em copped a barbie dream house and you can play the part,” she raps. “I ain’t tryin’ to bust it open in a trailer park.” This diss is another surprise, not only because Minaj and Eminem have been friendly in the past, but because he’s featured elsewhere on the album.

There were even rumors that Minaj and Eminem were dating a few months ago, but those proved to be false. The two previously worked together on the track “Roman’s Revenge.”

“Man, Uzi is my baby, he ain’t takin’ an L / But he took it literally when I said “go to hell,” Minaj spits. The punchline here is a play on the incident where Lil Uzi Vert told his fans that they’re “going to hell with him” at the 2018 Wireless Festival.

Minaj and Uzi Vert have collaborated on the remix to “The Way Life Goes.”

Minaj’s verse pokes fun at Thug’s distinct vocal style, and the fact that he often wears women’s clothing. Minaj and Thug previously collaborated on the song “Anybody.”

“I remember when I used to have a crush on Special Ed / Shoutout Desiigner, ’cause he made it out of special ed,” she raps. “You wanna f**k me, you gotta give some special head / ‘Cause this p**sy had these n**gas on some special meds / Like Mike Tyson, he was biting my s**t.”

Minaj and Desiigner’s have never officially collaborated on a track.

Chicago west side, I can feel the love.?get the app ??‍♂️ because yal purging out here Smh?‍♂️

“I tried to f**k 50 for a powerful hour,” but all that n**ga want to do is talk Power for hours,” she raps. Minaj is taking shots at Power, the televisions series that 50 executive produces. 50 and Minaj have yet to release an official collaboration.

“YG in the game with the hammer yelling “gang, gang” / This isn’t what I meant when I said a gang b**g.” While far from the most brutal diss that Minaj issues on the track, it is a bit surprising given that the two just collaborated on the Top 40 hit “Big Bank” alongside 2 Chainz and Big Sean.

Minaj also appeared on the remix to YG’s breakout single “My N**ga.”

“And I would’ve had that Odell Beckham banging the cake,” she spits. “‘Til I saw him hopping out of cars dancing to Drake / I been a five-star b**ch, man, word to God / I’mma give that n**ga Future thirty.” Minaj gets three birds with one stone here, calling out Beckham, the track’s only non-musician, along with collaborators Future and Drake (again).

Minaj and Future previously collaborated on the tracks “Rich Friday” and “You Da Baddest.”

FATHER OF ASAHD THE ALBUM IN THE WORKS AND SOON REACH . ?? @wethebestmusic

“Had to cancel DJ Khaled, boy, we ain’t speaking,” she explains. “Ain’t no fat n**ga telling me what he ain’t eating.”

Minaj’s relationship with Khaled dates back to 2013, when the producer proposed to her on MTV. They previously collaborated on the tracks “I Can’t Even Lie,” “Take It To the Head” and “Do You Mind?”

“Tekashi wanna menage, I said tre-way,” she wraps in the second verse. “Curved him and went the Kim and Kanye way / the Barbie Dreamhouse and you can play the part / I ain’t tryna bust it open in the trailer park.”

Minaj and Tekashi recently released the track “FEFE,” but the young emcee also went on Instagram to criticize her YG collab “Big Bank.” Its possible that that’s what prompted her to diss him here. 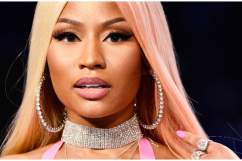 How to Stream & Listen to Nicki Minaj’s ‘Queen’ Album