Nicki Minaj is gearing up to release her fourth studio album Queen. The album has been in the works for some time now, and while she yet hasn’t released a complete tracklist, Minaj has teased her fans with a handful of song snippets.

As we’ve done with Minaj’s Young Money cohort Drake, here are all the leaked snippets from the Queen recording sessions, with potential titles, producers, and guest features listed.

On May 29, a snippet surfaced of the track “Ganja Burn.” The track has an uptempo, Afro-pop beat, similar to what Drake and Wale did with some of their previous releases, and The leaked video that accompanied the track mirrored the Queen album cover.

Genius has yet to uncover who produced the “Ganja Burn,” but we do have enough of the song to hear Minaj drop references to Gandhi and film star Audrey Hepburn. Check it out above.

Minaj posted a fifteen second video of “Everything” on April 28. The video, which appeared on her Instagram story, shows her singing along to the track while sitting in what appears to be a club. “Everything” is a much slower track, and shows off Minaj’s softer side like her 2017 single “Regret In Your Tears.”

Minaj dropped this six second snippet on May 15 on her Instagram story. The track, while untitled, contains the hardest beat of all the snippets so far, and appears to have backing vocals from Atlanta rapper Future.

Minaj and Future have a long track record together, with hits like “Rich Friday” and “You Da Baddest” peppering their respective catalogues. Given that Minaj and Future are scheduled to go on the upcoming NICKIHNDRXX tour together, it makes sense that they would collaborate on Queen.

The shortest snippet we have thus far, “Benz On It,” comes in at an anemic four seconds. The biggest showcase is the instrumental, which registers as both epic and victorious. The song first played during a Benz commercial that Minaj did earlier in the year, and is rumored to appear on the album.

Minaj uploaded this snippet shortly after announcing that she would be launching a Beats 1 show titled Queen Radio. The first episode is said to feature a Q&A with her fans, and possibly more insight into the album itself.

As for the snippet, this untitled track shows off a harder Minaj, rapping over a beat that is trap-influenced while owing some of its stuttering rhythm to dance music. Check it out above.

Nicki Minaj 'Queen' all snippets!Every snippet of the upcoming highly-anticipated album. There is also another 6 second snippet possibly featuring Ms. Lauryn Hill but as we don't know which number track that is I didn't add it to the video. I also pitched 'Ganjah Burn' snippet because sadly it is leaked & I didn't mean to spoil people. As…2018-08-05T17:02:15.000Z

Another brief snippet, this one appeared on Minaj’s Instagram story while she was riding in a car. While we don’t hear any of her verses on the track, its clear that the song is hard-hitting, with electronic flourishes and a pulsing drum pattern. The snippet starts at 1:17 in the video above.

Queen‘s release date was pushed back from August 10 to August 17. The reason, according to tweets by Minaj that have since been deleted, was so she could clear a Tracy Chapman sample.

“So there’s a record on #Queen that features 1 of the greatest rappers of all time,” she wrote. “Had no clue it sampled the legend #TracyChapman – do I keep my date & lose the record? Or do I lose the record & keep my date? ??‍♀️ do we push #Queen back 1 week? Ugh! I’m torn, y’all help.”

It’s possible that the rapper that Minaj is referring to is Eminem. According to Genius, Minaj already teased the possibility of Em showing up on the album’s opening track back in June. Given the mutual respect between the two emcees, it wouldn’t be a stretch. 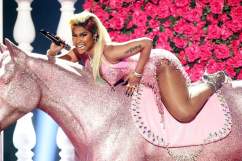 Is This the Tracklist for Nicki Minaj’s ‘Queen’ Album? Not Likely