Princess Beatrice and Princess Eugenie have been increasingly thrust into the public eye as they’ve gotten older. The two made headlines at the wedding of Kate Middleton and Prince Harry, for example, when their dresses and hats were compared to the evil stepsisters from Cinderella.

Although they aren’t the most popular royals and don’t have their every move detailed in the tabloids, the two women have certainly seen their fair share of media attention over the years. Now, with Eugenie set to marry her beau, Jack Brooksbank, at St George’s Chapel, in Windsor, in October, the two know that all eyes will be on them once more.

The sisters told Vogue that they constantly face “mockery” and criticism.

“It’s hard to navigate situations like these because there is no precedent, there is no protocol. We are the first: we are young women trying to build careers and have personal lives, and we’re also princesses, and doing all of this in the public eye,” Princess Beatrice, 29, told the outlet.

“We want to show people who we are as working, young, royal women, but also not to be afraid of putting ourselves out there. Nowadays it’s so easy to recoil when you see a perfect image on Instagram – but it’s important that it’s real. We’re real,” Princess Eugenie, 28, added.

Things most certainly haven’t been easy for the Queen’s two granddaughters, who even admitted to breaking down over the mean things printed in the press.

Princess Eugenie specifically let on about getting upset while at a party at Buckingham Palace.

“There was a horrible article that had been written about Beatrice and she got really upset. We were just about to step out and she had a bit of a wobble and cried. I was looking after her. And then about an hour later, I had a wobble and started crying and Bea was there for me,” Eugenie recalled.

At the end of the day, the sisters want people to see that they are “real,” and that they live their lives just as any other sisters do (save for the fact that they are part of the royal family). In fact, the two fight like sisters, too!

“One of the biggest fights we ever had was about a pair of Converse trainers. We have the same size feet and both of us had identical pairs. One pair got trashed and the other sister may have swapped them,” Princess Beatrice joked. 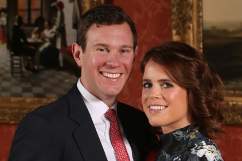