Months ago, it was reported that the cast of Real Housewives of New York were involved in a dangerous boat trip from hell, while filming the show. The episode is finally here and fans will get to see what really went on during the disastrous event.

The ladies were on vacation together in Cartagena, Colombia and several of them were butting heads, Carole Radziwill and Bethenny Frankel in particular. But, when they were aboard a boat that was falling apart, their differences went out the window. Sonja Morgan said on the show that, “It was funny because when I looked out the door, I saw Carole [Radziwill] and Bethenny [Frankel] holding each other. It said a lot to me … I was hugging Ramona Singer like she was my best and only friend again.” Ramona Singer, Sonja Morgan, Luann de Lesseps, Tinsley Mortmier, Carole Radziwill, Dorinda Medley and Bethenny Frankel were all out to sea when the waters became increasingly rough, according to E! News.

In February 2018, when the boat ride occurred, People reported that the incident left the cast fearing for their lives. The cast generally goes on luxurious vacations together, so when they were reportedly told that they were going on “a sun-soaked cruise on a 5-star yacht,” they believed it. An insider told People that, “The boat was old, beaten up and falling apart. There were no amenities, no food, and a crew that didn’t know what they were doing. I mean, the anchor had to be sawed off before they made it home because it was so rusty and tangled. That’s how bad this was!”

Apparently, the boat’s anchor got caught during the ride and the insider revealed, “It was a disaster. The vessel was so shaky and the waters so rocky that the women got really sick. Things began flying off the boat. The engine caught on fire. None of the crew spoke English. None of the women felt safe. Carole got sick and was throwing up overboard. The others were all screaming for help. They were all scared out of the minds. They thought they were going to die out there … They were soaked to the bone … and sick by the end. They were crying out for their lives. When smoke started coming form the ship, they thought it was over.” According to Page Six, there were only a couple life jackets on board and the boat was taking on water, but it stayed afloat. Carole Radziwill and Tinsley Mortimer were reportedly throwing up from seasickness on the trip as well.

After the boat incident occurred during filming, the Bravo network released the following statement about the situation to the media:

The Real Housewives of New York City cast was recently on a boat in South America and encountered turbulent water. Thankfully, everyone is fine and was able to continue their vacation as planned. The safety of our cast and crew is paramount and, to that end, we are doing a full investigation.

So, fortunately, though there was a major scare aboard the boat, it doesn’t appear that the boat crashed or ended up sinking.

In addition to the boat accident, some of the cast members reportedly left the vacation, sick from a parasite. Radziwill admitted to Page Six that, “We all ate something that did not agree with us. I think it was a fish because Bethenny [Frankel] and Tinsley [Mortimer] are actually allergic to fish and they didn’t eat the fish, and the rest of us did and we all did come home with a parasite.”

It’s safe to say that this cast won’t be going back to Cartagena any time soon. 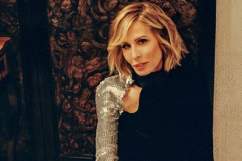