Ian Ziering and Tara Reid are back for The Last Sharknado: It’s About Time, aka Sharknado 6, reprising their roles as Fin Shepard and April Wexler. For those who have been following the series, then they may remember that Wexler had been brought back to life and is now part robot. In addition to April’s return, the Sharknados left Earth destroyed in the last edition of the series. And now, Shepard and his fellow shark fighters must travel back in time to stop the original Sharknados before they destroy the planet. One of the most entertaining aspects of the series is that each Sharknado movie incorporates a ton of celebrity cameos. Before we get into the main cast and characters, check out the reported celebrities who are appearing in Sharknado 6 below.

Some of the celebrities making appearances in Sharknado 6 include Ziering’s former 90210 co-star Tori Spelling, Spelling’s husband Dean McDermott, Darrell Hammond, RuPaul’s Drag Race alum Alaska Thunderfuck as a magical evil sorceress, Dee Snider, Neil deGrasse Tyson and La Toya Jackson. The Hollywood Reporter has added Gilbert Gottfried and Christopher Knight to that list as well. According to the IB Times, Spelling and McDermott actually play Ziering’s character Fin Shepard’s parents and when it came to including his former 90210 cast-mate in the film, Ziering told Us Weekly that, “Anytime I get a chance to see my old castmates again, it’s always a party. Having them play Fin’s mom and dad … I had to think through a little bit. But they did an amazing job. It was great to work with them both.”

When it comes to some of the members of the main cast, Ian Ziering returns as Fin Shepard, Tara Reid is back as April Wexler, and Cassandra Scerbo is Nova Clarke. Vivica Fox as Sky has also returned. Actor Jonathan Bennett is also on board for the film, as Billy; Chris Owen is Gil; and Judah Friedlander returns as Bryan, according to NJ.com. There will also be a cameo from Sharknado creator Thunder Levin in the movie. Levin didn’t help write the 6th film, but he wrote on Twitter that he has a small appearance in the final scene.

Josh Van Houdt, Syfy’s VIP of original co-productions, previously told The Hollywood Reporter what the network looks for when casting all of their celebrity cameos in the series. Van Houdt explained, “We look for cameos from all areas of pop culture to appeal to every fan watching the movie. Whether we’re casting a professional athlete, reality star, actor, musician or politician, our goal is to include a wide variety of stars for viewers to either get excited about or, on the flip side, witness getting eaten by a shark in a spectacular fashion.”

Unfortunately, though the Sharknado films have included a large amount of star cameos, there were still some that the franchise was unable to secure. Chris Regina, Syfy’s former head of original films, confessed to Syfy Wire that, “The one cameo I regret was that we never got Rob Gronkowski, who by the way was like the longest one we kept chasing over and over again. He wanted to be in Sharknado, and after so many of them, we could just never get the schedule together for him. We always wanted him spiking a shark.” 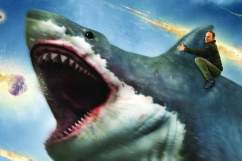 How to Watch ‘Sharknado 6’ Online