A riana Grande will release her new album Sweetener on Friday. The album has been teased since 2017, and was prefaced by the singles “No Tears Left to Cry,” “The Light Is Coming” and “God Is a Woman.”

How to Stream & Listen to Ariana Grande’s New Album

Sweetener will be made available on a number of different streaming platforms at 9 p.m. PST on Thursday or midnight EST on Friday. We’ve listed the different platforms that the album will be released on, and the ways in which you can listen to them below.

You will be able to stream Scott’s album on iTunes and Apple Music. If you have an Apple Music account, you can go into the app on your phone or tablet and set the notifications to alert you when the album is out. Click here to learn how.

Based on the standard release schedule for Spotify, the Sweetener album will also be available to stream. If you don’t have a Spotify account, you can sign up for one here and pay only $0.99 for the first three months.

Grande’s album will also be available to listen to on Tidal. The streaming service offers a free 30-day trial with Tidal Premium, which provides  access to music videos and curated playlists.

Those closest to Grande have praised Sweetener as her most mature release to date. Grande’s manager Scooter Braun, who also represents Justin Beiber and Carly Rae Jepsen, told Variety that the album will initiate “her time” as an artist. “She has such an extraordinary voice and it’s time for her to sing the songs that define her,” he said. “Whitney, Mariah, Adele … when they sing, that’s their song. Ariana has big vocal moments; it’s time for her song.”

Pharrell Williams, who produces on the album and is featured on the track “Blazed,” spoke similarly high about Grande’s evolution. “In all honesty, I feel like [after Manchester] was when different people from the record company actually started to understand what we were trying to do,” he told The Fader. “It’s unfortunate that that situation is what gave it context, but they were able to really see it then. And that’s the truth.”

Grande has also revealed some of her favorite tracks to fans on Twitter. When asked what the best tracks on Sweetener are, the singer responded by writing: “okay omg…..so currently ‘I’m in this world,’ ‘r.e.m.,’ ‘borderline,’ ‘pete davidson,’ ‘better off,’ ‘goodnight n go’….but it changes a lot..’borderline’ & ‘everytime’ i go back n forth between in this top five.” Check out the official tracklist above.

Grande’s fiancé Pete Davidson, who inspired the namesake track, also listed some of his early favorites. Grande posted a video of the Saturday Night Live star as he rattled off his recommendations: “God Is a Woman,” “Pete Davidson,” “R.E.M,” “Sweetener” and “Better Off.” He adds: “They’re all sick.” 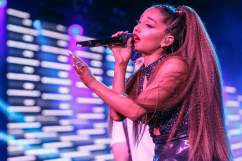 What Time Will Ariana Grande’s ‘Sweetener’ Be Released?